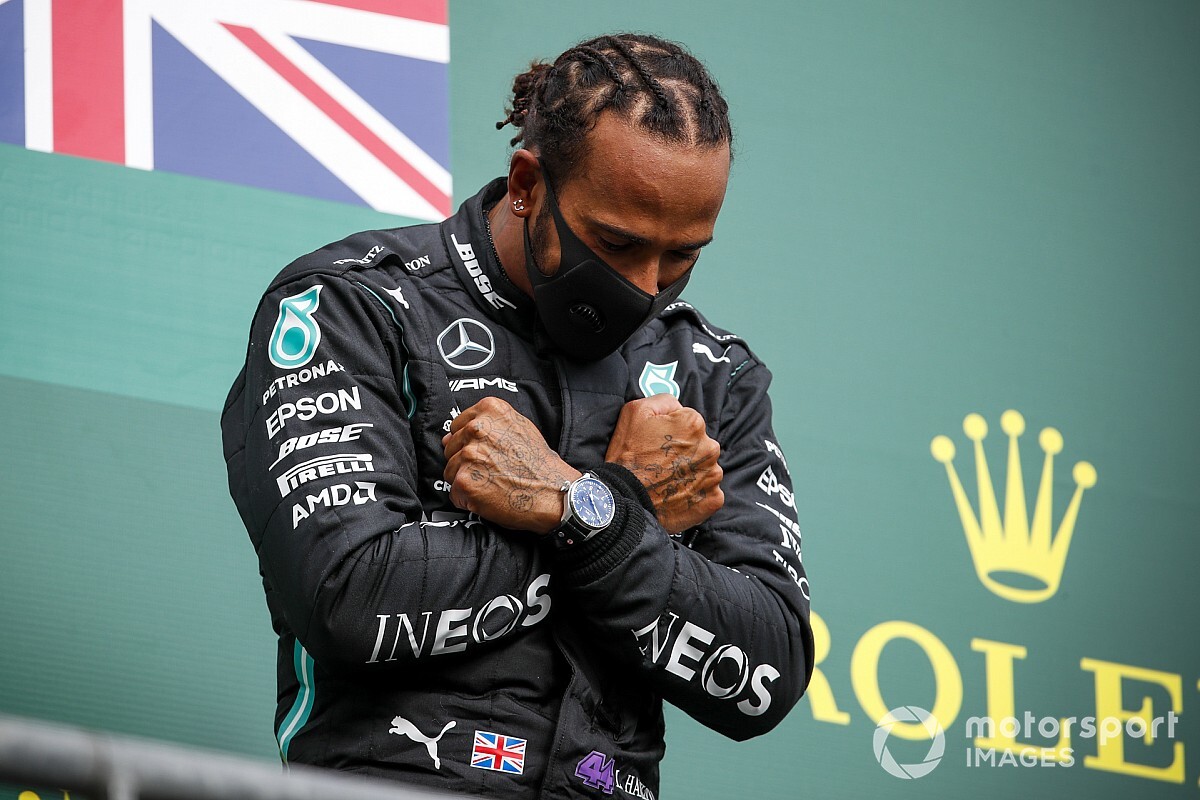 The death of Boseman, a leading actor and star of black superhero film Black Panther, sparked an outpouring of tributes from across the world on Saturday.

Hamilton dedicated his pole position at Spa to Boseman, and performed the Wakanda Forever salute made famous in the Black Panther film after both qualifying and his race victory.

Mercedes team principal Toto Wolff said the “tragedies” around the world that Hamilton was contending with through 2020 – amid the backdrop of activism against racism and racial injustice – had “driven” the six-time world champion.

Hamilton explained following his victory on Sunday the challenge that he faced to remain focused and charge his energy into performing on-track given the global events of 2020.

“I’ve generally been feeling a lot of weight on my heart [and] spirit,” Hamilton said.

“You know, when you’re watching the news, when you see what’s happening around the world and I feel really quite affected by it.

“I was so incredibly proud when Chadwick was Black Panther, because as a kid, dreaming of super heroes and finally see a superhero of a similar colour to me was really just such a remarkable moment.

“So when I woke up and I got the news from a friend who has said I’m crying writing this message to you about Chad, and then reading the news, I just broke down.

“But when you find your purpose, when you know what you’re going for, what your target is, will can get you quite far.

Hamilton’s victory at Spa marked his fifth win in the opening seven races of the 2020 season, extending his lead at the top of the F1 drivers’ championship to 47 points over Max Verstappen.

The only point Hamilton looked vulnerable in the lead at Spa came at the race start and following the safety car period, but he was able to fend off teammate Valtteri Bottas on both occasions.

Hamilton did not pick his Belgian Grand Prix victory as his smoothest of the season so far, instead selecting the Spanish Grand Prix earlier in the month.

“I would say the last one probably was. Barcelona, particularly the race, was the smoothest race I think I’ve generally had,” Hamilton said.

“This one was positive but it’s very stressful with the start, as is Barcelona, but the start is not easy. And the restart also.

“I think it was a pretty straightforward weekend, but there are definitely areas we can improve.”

Dak Prescott not to blame for coin toss, Lawrence says

4 Most Common Causes of Motorcycle Accidents in the U.S