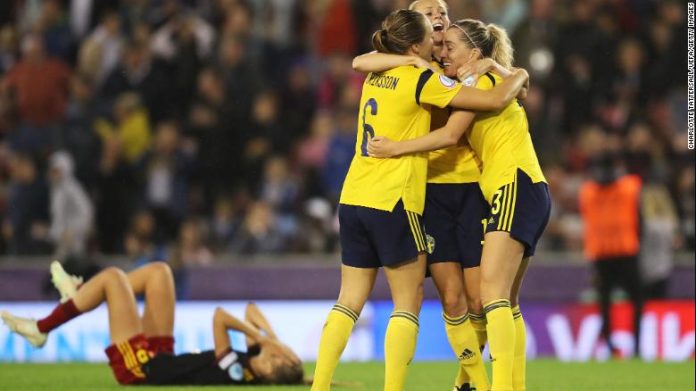 At the Leigh Sports Village stadium outside Manchester on Friday night, Sweden defeated Belgium 1-0 with a late winner from seasoned Linda Sembrant to guarantee her team’s place in the Women’s Euro 2022 semifinals.

Despite being the highest-ranked team still in the game, the Red Flames, who were playing in their first-ever quarterfinal of a major event, was defeated by the Swedes.

After the opening kickoff, Sweden quickly had the upper hand. Nicky Evrard, the goalkeeper for Belgium, stopped a shot from Filippa Angeldahl of Manchester City in the sixth minute. The Blgult then made a flurry of efforts.

Only ten minutes later, Stina Blackstenius had another chance to score, but Paris Saint-Germain defender Amanda Ilestedt’s ambitious header was quickly stopped by Belgian Evrard, who grabbed hold of the ball.

As Blackstenius produced a brilliant move to go past a line of defenders from Belgium and fired into the bottom corner, the audience cheered in anticipation. Sweden first celebrated, but VAR later declared the goal to be offside.

Midfielder Justine Vanhaevermaet gave Belgium its first opportunity of the game, but her 25-yard shot missed the left goalpost. Before the break, Sweden made a frantic effort to take the lead but failed when Blackstenius was unable to get the ball past Evrard. Johanna Rytting Kaneryd of Sweden and Tine De Caigny of Belgium compete for a header (right).

As the night went on, it appeared like Sweden and Belgium would play out a tie-breaker and compete in overtime, with the former unable to make use of its opportunities.

However, Sweden was given a corner in the 92nd minute, and Sembrant chipped the ball past Evrard to score, breaking Belgium’s defense.

What are the possible impacts of online betting sites?

5 Tips to Get the Most Out of Amazon Streaming