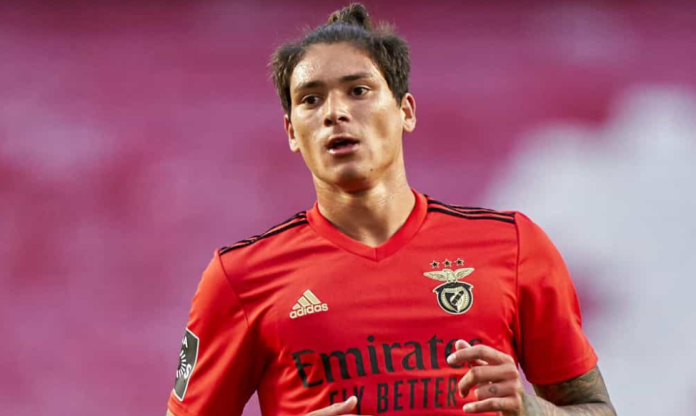 Darwin Nunez, a star player for Uruguay, has been linked to many top clubs, although there have been conflicting rumors that he has rejected a transfer to Man United.

Although 22-year-old Nunez has had a phenomenal season for Benfica, Fabrizio Romano claims that he will “100 percent” depart Lisbon this summer.

Where exactly is he planning on going?

There are several places he can play, and it all comes down to where the young striker thinks he can be successful.

Darwin Nunez Is Looking For His Options

According to RMC in France, Nunez rejected Manchester United in favor of a spot in Europe’s top club competition.

Nunez has scored 34 goals in 41 appearances across all competitions this season, and United is reportedly prepared to spend $85 million to get him.

Furthermore, it has been reported that Darwin Nunez has rejected a move to Newcastle in favor of signing with a Champions League team in Europe.

Reports suggest that Nunez is set on leaving for the Premier League, with Manchester United and Newcastle both being possibilities. According to CBS Sports, Manchester United is interested in signing Jonathan David, a striker currently playing for Lille under manager Nunez.

ETH’s plan to rebuild United with Nunez at the helm makes a lot of strategic sense.

Maybe Bayern Munich is the greatest fit for Darwin Nunez if he wants to join a team that needs a mobile striker to be the main focus of their team’s attack.

All the talk around the German champs right now is that Lewandowski is leaving for Barcelona this summer. With that in mind, Barca may be an excellent destination for Darwin Nunez. Or maybe the strain will be too much for his young career.

When looking at Premier League teams, Liverpool,Spurs, and Man City all have solid offensive plans in place, but Chelsea may be a fantastic alternative.

Theoretically, Nunez would fit in well with their style of play, and once the club’s new owners take over, Thomas Tuchel would likely try to trade Romelu Lukaku and some of his other forwards in order to reinvigorate his assault.

Of course, Arsenal also appears like a wonderful match for him if he changes his mind and is willing to join a team outside of the Champions League.

5 Ways To Protect Your Child From Bullying