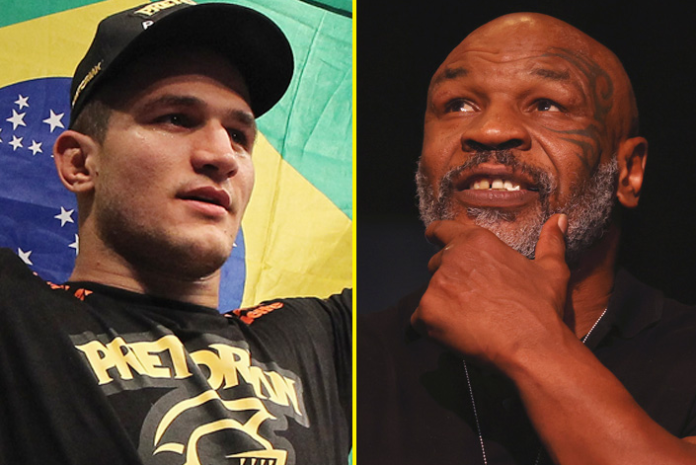 UFC legend Junior Dos Santos has claimed that Mike Tyson snatched away a $50,000 winning bonus. He feels he needs to get back what the UFC owes him.

Junior Dos Santos had a reputation for picking up the most knockouts. ‘Cigano’ has picked up KO/TKO wins over ex-champs like Frank Mir, Gabriel Gonzaga, Cain Velasques along with other reputable fighters such as Derrick Lewis and Mirko.

He also picked up 3 KO of the Night bonus. But he says there was a single instance when he won both the Fight and KO of the Night but was deprived by a combat sports legend from another field, Mike Tyson.

Junior Dos Santos said that he rightfully earned double bonuses night when he was up against Mark Hunt in 2013; Best KO and Best Fight, he remembered in an interview.

Junior Dos Santos Says His $50,000 Bonus Was Taken Away On Tyson’s Advice

Mike Tyson was present, and he said that it wasn’t necessary to give both bonuses to one fighter and suggested that it be given to someone else. But a fighter, it was standard to win 2 and sometimes even 3 bonuses in a day. It meant a lot to him, even though it wasn’t much for the UFC.

Junior Dos Santos said that UFC was big, and Dana White should not have heeded the advice of someone from outside even though he was a legend. He believes that UFC could have given the bonus to another fighter, but not at his expense. He says that the bonus was snatched away from him.

Junior Dos Santos, now 37, lost his last 4 fights while at the UFC and was subsequently released this March. He has recently signed up with a new boxing management firm and is planning for a fight with names such as Anthony Joshua, Tyson Fury, and Deontay Wilder.

Chiefs-Eagles Faceoff Is Being Awaited In Super Bowl 2023, Looking For Predictions?

The upcoming Super Bowl 2023 is on everyone's mind with Chiefs-Eagles. It will be a clash between the Philadelphia Eagles and Kansas City Chiefs....

CJ McCollum Shared His Sorrow In Death Of Tyre Nichols

This is a tragedy that has become all-too-familiar in our society – CJ McCollum, a professional basketball player, has shared his sadness in the...

Even though the federal funds were depleted long ago, several states that joined the game later are still dispersing aid. While several programs came...

US President Biden and lower house Speaker Kevin McCarthy are set to meet over high stakes even as the federal debt ceiling standoff continues....

Chris Sununu Leaves Door Open To A Presidential Run In 2024

Chris Sununu is keeping all doors open when it comes to running for the GOP presidential nomination in 2024. The New Hampshire Governor has...