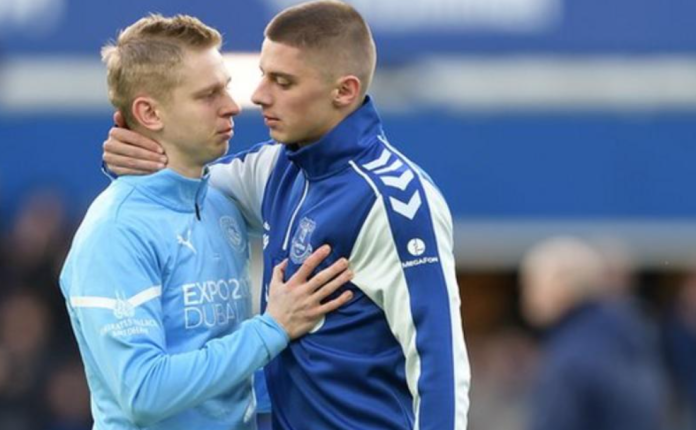 Oleksandr Zinchenko and Vitaliy Mykolenko shared an emotional moment prior to Saturday’s clash between Manchester City and Everton as the pair hugged each other in the wake of Russia’s attack on Ukraine.

The Ukrainian players might be on opposing teams at Goodison Park but this did not matter here, given what is currently taking place in their homeland.

With both teams warming up prior to kick-off, Oleksandr Zinchenko and Mykolenko headed over to one another to embrace and appeared to share a few words of comfort.

Both the players were named among the substitutes for their respective clubs, and they re-emerged from the tunnel a few minutes before kick-off to take their places on the bench.

Oleksandr Zinchenko Appreciated The Support From The Teams

Zinchenko was clearly appreciative of the support from both sets of supporters as he applauded the home fans on his way across the pitch.

As the two sides came out for the match, each of Everton’s players held a Ukrainian flag over their shoulders.

Meanwhile, Manchester City’s squad all wore shirts with the words ‘NO WAR’ across the front and back of them.

The 1969 hit ‘He ain’t heavy, he’s my brother’ by The Hollies was then played inside the stadium, sparking an emotional reaction from Zinchenko.

The City left-back was unable to hold back the tears as the whole of Goodison Park rose in a show of solidarity with Ukraine.

Manchester City has the chance to move six points clear at the top of the table with a win, while Everton could increase the gap between themselves and the bottom three if they overcome Pep Guardiola’s men. However, it is the emotional scenes before a ball was even kicked that are likely to live long in the memory.