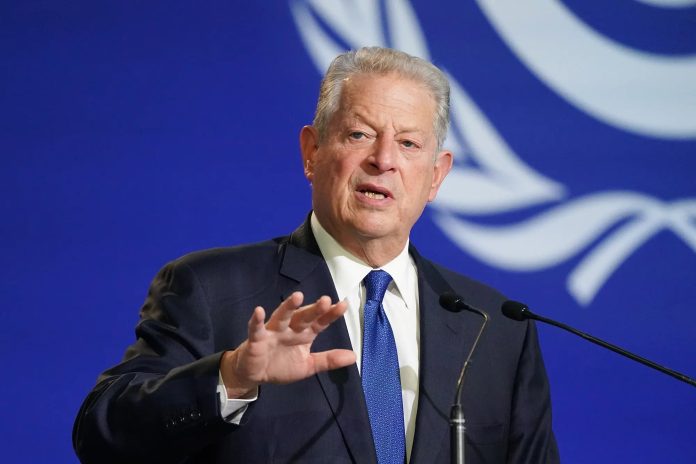 Al Gore, a former vice president, compared climate change denialists to the Uvalde police officers who did nothing when 21 students and teachers were shot and killed in their classrooms on Sunday. He said, They heard the screams, they listened to the gunfire, and nobody came forward.

According to Al Gore, who spoke on NBC’s “Meet the Press,” the climate doubters are analogous to all of those approximately 400 law enforcement officers in Uvalde, Texas. The latter were waiting outside an unsecured door while the children were being killed.  Nobody intervened despite hearing the gunshots and the screaming.

Al Gore further added may God grant comfort to the beleaguered families. And according to law enforcement officials, that isn’t what law enforcement typically does. And given this urgent situation on a worldwide scale, what we are doing with our inertia and failure to open the door and put an end to the killing is not typical of what humans are capable of. We do have the answers.

Al Gore, who has long raised the alarm about climate change, commended President Biden for his efforts to address the problem but said that for there to be genuine change, Congress would have to act, which he conceded would be impossible given the legislative roadblocks.

Gore provided more specific examples of actions he believes the executive branch could take without waiting for Congress in a separate interview on Sunday. He said the Environmental Protection Agency could take additional measures, Vice President Biden could stop approving new drilling on public lands, and he could name a new leader of the World Bank.

Gore stated on ABC’s “This Week” that “mother nature has already declared it a global emergency” and that “I’ll leave it to others to parse the pros and cons of what an emergency declaration would lead to.” Gore was responding to the question of whether Biden should heed the recommendations of climate activists urging him to declare a national climate emergency.

Additionally, he stated on Sunday that he would like to see more politicians make climate change a key component of their programs.

When NBC’s Chuck Todd questioned whether he’d consider running for president on a climate agenda, he responded, Thank you for making the offer. However, as a recovered politician, the longer I go without relapsing, the less likely it is that I will.

Selena Gomez On Her Relationship With Her Body

What Do Title IX Lawyer Do?