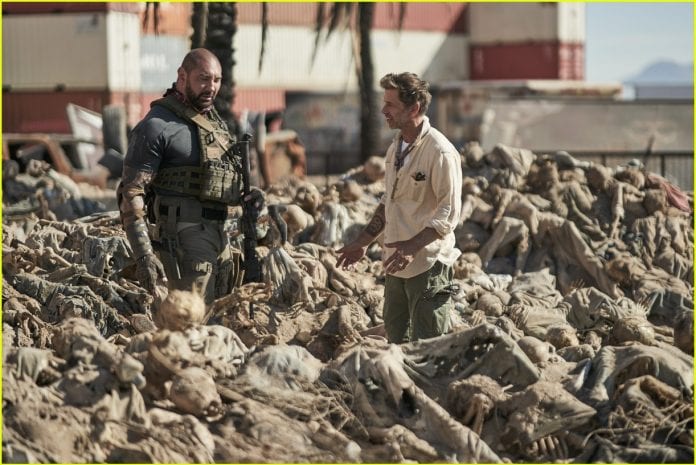 A full trailer of Army of the Dead, directed by Zack Snyder, has been recently dropped. The film will be exclusively available on the streaming platform, Netflix.

Army Of The Dead Is Snyder’s Take On Zombies

The film might have zombies but it is not just about the undead. It takes place in Las Vegas, which has been overrun by hyper-intelligent zombies, according to the Army of the Dead’s first trailer. On Tuesday, Netflix released the trailer which is centered on a crew running a heist in the same Las Vegas. However, the zombies are the main attraction.

The Army of the Dead trailer starts by showing Scott Ward, played by Dave Bautista and an ex-war hero against zombies, working for a diner in an unknown town. Subsequently, he is offered a huge heist job. The target is the vault under the Vegas strip that has cash money amounting to $200 million. However, the city is completely blocked off as it has been taken over by zombies. Ward then goes on to assemble this expert crew of veterans in zombie-fighting, badasses, and thieves to complete the mission. But on entering the city, things are not what was expected at all.

When the crew makes it into Las Vegas finally, they are greeted by the discovery that the undead has mutated. They are now Alpha zombies, who are smarter and faster. They have also apparently societies of their own inside the Vegas ruins. This all leads to gratuitous amounts of zombies being killed while Bautista and his team try to get to the vault and escape with the money.

The cast includes, apart from Bautista, Ella Purnell, who starred in Sweetbitter, as Kate Ward who is Scott’s daughter. Other names are Tig Notaro, Ana de la Reguera, and many more. The Army of the Dead is jointly directed by Snyder and Shay Hatten of Parabellum.

Should companies ban political conversations? Basecamp is the latest to bar talks about politics

Looking To Buy A House During The Pandemic: Here Is What You Should Know

Billy Eppler Arrives At Mets With A Surprise