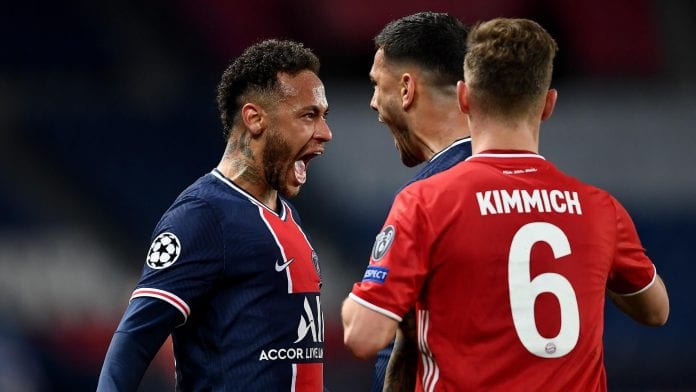 The PSG v Bayern second leg tie of the Champions League ended last night with the French team advancing on aggregate. However, Neymar, PSG’s star, had celebrated the victory by apparently doing so in front of Bayern’s Joshua Kimmich. PSG has now completed a reversal of last year’s UCL final result.

Last week, in the first leg of the tie, PSG had defeated Bayern 3-2 at the Allianz Arena. Although Bayern managed to win this one 1-0, it was not enough to overturn the number of away goals in the PSG v Bayern tie. The German side largely struggled to cope with PSG’s counter-attacks with Neymar finding the goalpost twice.

However, the final result did not discourage Hanis Flick, the Bayern coach, to praise his side’s efforts and that they deserved to go forwards more than PSG. Flick said over the two legs of PSG v Bayern, his team was better. However, a bit of bad luck and the loss of some key players led to the result that they have to accept. The German side was without their talismanic Robert Lewandowski, the Polish striker.

Mauricio Pochettino, the coach for PSG, replied that Bayern was right to think of themselves as the favorites going into the PSG v Bayern tie, given their history. However, he added that teams have to keep on fighting without ever giving up which is the beauty of football.

Neymar had high praise for the rest of his team but still did not consider themselves as the favorites for the competition. In the next round, Borussia Dortmund or Manchester City will await them. He said that the team’s intention was made clear in the previous season when they went to the final but lost against Bayern. He said this time around, they had to prove to themselves that they can overcome the German side.

Currently, Neymar and PSG are holding talks over an extension to the player’s contract. Neymar has clarified his intention to stay at PSG.

Stimulus Checks Of $500 For Residents Of This State