Home Sports Barcelona Down In The Europa League: Can They Beat Manchester United In... 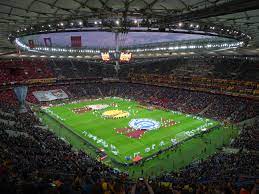 FC Barcelona’s exit from the UCL group stage left Real Madrid to be the only team to represent Spain in the Champion’s League. However, after the draw of the of knockout stages of both the competition, it is tough to say which set of fans are happier.

Barcelona has drawn Manchester United as their competitors in the knockouts of the Europa League. The two teams meet again after their clash in two Champions league fixtures in 2009 and 2011.

The Europa League fixtures hasn’t disheartened the football fans as they delivered this huge tie in the knockouts. However, with the recent forms of both the teams in the European competiton, who will beat whom?

For a spot in the round of 16, Barca and Man Utd, two European powerhouses searching for a way to glory, will compete against one another. It also means that either of the two bosses, Xavi, or Erik ten Hag will have to leave Europe very soon, which will cause the club further shame.

Barcelona appears to be slightly ahead of United in terms of growth and progress, but United is also capable of defeating them. It will be a strategic struggle in addition to being the Frenkie De Jong duel and CR7’s comeback to the Spotify Camp Nou. Raphael Varane and Casemiro will go through the same as being former Real Madrid player just like Cristiano. Additionally, it might be Sergio Busquets’ final-ever European match, making it a potentially interesting tie.

Xavi who took over Barcelona from Koeman a couple of seasons back had immense expectations from the Barcelona fans but has failed to deliver so far. Even though they are league toppers in La Liga, Barcelona under Xavi have gone to Europa League after UCL group stage exit for two season straight. Whereas, Ten Hag also has to face that pressure from the Manchester United back. Their fans will also be pumped up to secure victory against Barca.

Matthew Lohmeier, The Commander Of The US Space Force, Fired

How to Counter Cyber attack while streaming

Carnival Corporation & plc (CCL) traded 13470020 shares on hands in most recent trading session and observed an average volume with 48700.74K...

Are You Looking For Active Stock? Energy Transfer LP (ET)

Snap (SNAP) disclosed a change of 2.16% and its listed share value at $11.33 in the recent trade transaction. This company...

NextEra Energy, (NEE) acknowledged active focus on shares in the last trading session.The stock disclosed a change of -1.67% and its...

Are You Looking For Active Stock? Lufax Holding Ltd (LU)