Home Top Stories Deion Sanders Wanted His Team Dressed For Nines And Fitted Them With... 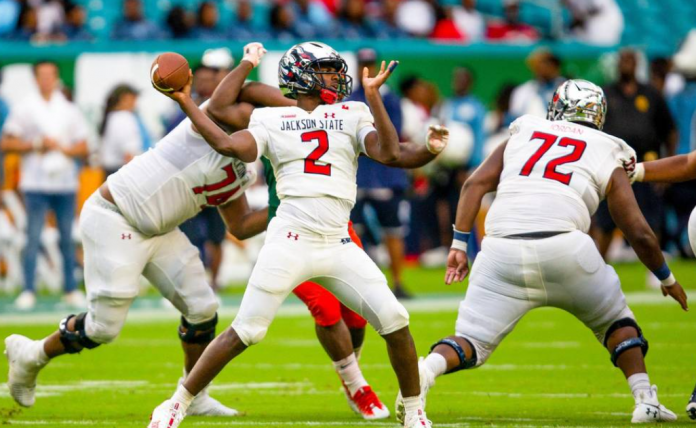 Deion Sanders and Micheal Strahan are both dedicated to bringing historically Black colleges and universities the recognition and resources they deserve.

Enthused by the murder of George Floyd, Sanders chose to take his first job as a collegiate head coach at the Mississippi HBCU Jackson State University. Strahan is a strong advocate of his alma mater, Texas Southern University, as well as the network of more than 100 HBCUs across the US.

How Sanders Obtained The Custom Suits For His Team

Strahan has been a long-time partner of Men’s Wearhouse and even has his own line of suits through the brand. So Strahan hooked up every player and coach with custom suits.

Sanders had a lot of other challenges to address when he arrived on campus. The team didn’t have nearly enough helmets, nor did the school have a suitable practice field. It’s not an uncommon situation for HBCUs, Sanders said — he described the programs to everyone as often overlooked and underfunded.

Strahan was open to the idea that Sanders wanted to take his team’s attire to the next level. A self-described extremist, Sanders decided to design custom suits for his players and coaching staff.

Schwartz-Morini requested Koral Chen, who works in business development for SMAC and the Strahan brand, to lead the effort. Chen liaised between Sanders and the Men’s Wearhouse staff as the ostentatious, fashion-forward coach developed his designs. She then worked with the brand to iron out the logistics of outfitting roughly 150 people.

Chen and Men’s Wearhouse facilitated an on-campus pop-up shop for the fittings. They had a team of tailors taking measurements.

When Jackson State’s team reached Miami on Wednesday ahead of its greatly anticipated matchup, the Tigers — donning their new suits — exuded the boldness famously credited to their coach.

Strahan, who wears a suit from the same line every morning on Good Morning America, said he thought a clean look like that gives you a sense of confidence and a sense of pride.

Wearing those suits with a team gives a sense of community, he said. Strahan added that accountability and teamwork are the only way to win.

Jackson State’s outfitting endeavor has encouraged other schools — HBCUs and Power Five programs alike — to inquire about hook-ups of their own.

Sanders’ key focus at the moment is leading his team against Florida A&M. The Orange Blossom Classic was at one point seen as an unofficial championship game for HBCU football programs. Sadly, the event lost momentum in the 1960s after the end of separation led many Black players to take their talents to schools besides HBCUs.

For the first time since 1978, the game will go on. This Sunday, Jackson State will play at Miami’s Hard Rock Stadium in front of thousands of fans, where the NFL’s Miami Dolphins play their home games.

His choice to coach at Jackson State did seem to persuade other former pros. The former Tennessee Titans star Eddie George consequently took the helm at Tennessee State, and Sanders said NFL stars like Ray Lewis and Ed Reed have articulated interest in coaching at HBCUs, too.

As a student of an HBCU, Strahan knows the influence these coaches can have on their players and the communities around them.

VOLATILITY ANALYSIS: Volatility remained at 8.33% over last week and shows 6.88% volatility in last month. Market risk that established with...

Is this stock is Attractive? KE Holdings (BEKE)

KE Holdings (BEKE) exchanged 11824573 shares on hands in most recent trading session and observed an average volume with 19784.51K shares....

Exicure, (XCUR) acknowledged active focus on shares in the last trading session.The stock disclosed a change of 6.70% and its listed...