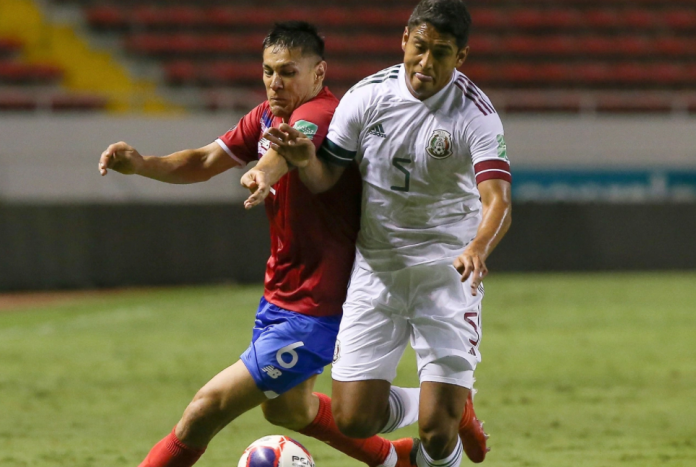 Mexico won against Costa Rica in a game that ended 1-0 for the Mexicans. El Tri won 2 of their games, to start off, for the first time since 2005. The game was for the World Cup qualifying sessions.

Mexico won their previous game against Jamaica on Thursday. The game ended 2-1 after Pineda scored a penalty in the first half of the match.

Mexico In The World Cup 2024 Qualifiers

Mexico remains at the top of their qualification table in CONCACAF after 2 rounds. They still stick to the top position even though they missed starters from the last game.

Manager Martina had to stay behind due to surgery to fix his retina. The assistant Jorge Theilen had to lead the team for the game.

Costa Rica was building on a draw against Panama, which ended 0-0. The manager Luis Fernando Suarez also questioned the Mexican dominance in the CONCACAF region.

He believes that the US and Mexico are giants among little teams. He tried to make it difficult for the Mexican side, by playing high press and canceling the opponent’s style of playing from the back.

Costa Rica got many chances but failed to put one in the net. They were later, unable to keep Mexico at bay and abandoned their pressing.

They chose to exploit Julio Dominguez, who was playing at the right-back instead of Jorge Sanchez.

Alexis Vega had a great game but a tackle from Francisco Calvo saw his right ankle got caught in the grass. He was subbed out for Pineda and was seen in crutches after the game. A Bryan Oviedo foul on Andres Guardado called for a penalty, which was converted into a goal by Orbelin Pineda.

He slotted the penalty kick to the left, past the PSG goalkeeper, and made it 1-0.

El Tri is enjoying their best start in WC qualifying after 16 years. They won their first 2 during the 2006 WC qualifying and stamped their tickets for Germany. The USA was tied with them for the first position.

The Mexican fans and media want them to win big but it is quite difficult to do so on a regular basis. They will travel to Panama with a calm head and keep doing the things that they do.

The media chest is the perfect blend of traditional and tech for the happy...

“You have to give the manager longer!” | Discussing Arsenal’s long-term challenges | Super...

Joe Biden To Set Aside $500B For Climate Change: Could Be Biggest Component Of...