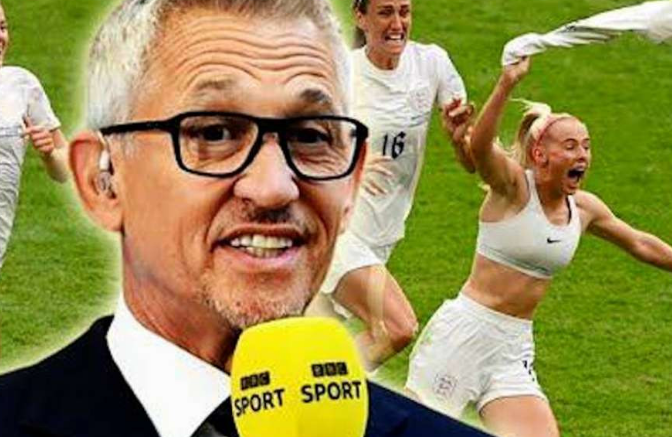 In response to criticism over a “misogynist” joke he posted about Chloe Kelly’s excitement after netting the game-winning goal in the European 2022 women’s final, Gary Lineker removed the tweet.

After striking England’s winning goal in overtime, Kelly took off her top as she wheeled away with teammates in joyous scenes at a crowded Wembley.

Kelly is England’s hero, bra none, yet Lineker was accused of “casual sexism” after writing in a remark on Sunday evening.

After receiving hundreds of crass joke comments, as well as criticism from individuals who had been offended, Gary Lineker erased the message. Someone on Twitter retorted, “Seriously Gary? A historic victory, a turning point for women’s sports, and an exhortation to young girls that have been taught they can’t. And you reduce this glory to a jab at a woman’s dress or undergarments. The @Lionesses deserve to be treated better than the rampant casual sexism present here.

On Monday, screenshots of the text were still being shared. One female activist said, “Now erased but misogynist pictures are forever and for ever and ever.” “The @Lionesses have really only gone and accomplished it, & Kelly is England’s heroine, bra none,” the BBC host’s full statement said.

In a conversation with a campaigner, Gary Lineker later refrained from apologising for the message. He received a message from Karen Ingala Smith, CEO of the Nia organisation that campaigns against violence against women, asking him to apologise and denounce the sexist reactions to his now-deleted poorly chosen post. Lineker retorted, “Given the jubilation, it was merely a play on words. I frequently post nonsense like that on this site, including on men’s football. Since many people did not see the game, they missed the context, therefore I deleted it.