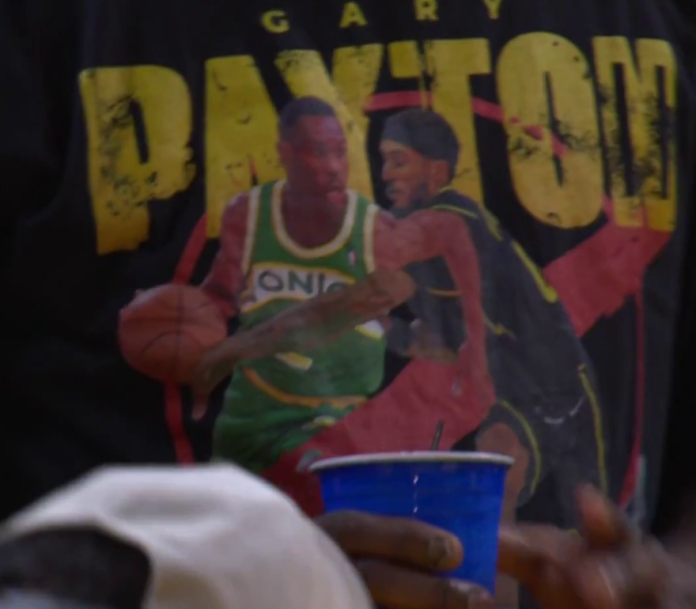 Gary Payton proudly wore a shirt honoring his son as he attended Game 2 of the Finals to support him.

Though he was well enough to play after recovering from an elbow fracture he sustained in round 2 against the Grizzlies, Payton II, who gets the moniker “Young Glove” because he plays defense like his father, did not get into the game.

According to Gary Payton‘s comments on the most recent edition of Dubs Talk with Grant Liffmann, he was not happy about that.

Game 2 of the Finals was really the first time Payton II had played in the Finals, and his dad seemed ready to cheer him on as he tried to shut down the Celtics.

Payton’s name is written in big, yellow letters on his jersey. Payton is wearing a throwback Seattle SuperSonics jersey as his son, in a Warriors outfit, stands guard.

Naturally, Payton spent the most portion of his playing career with Sonics, where he was named to the NBA’s All-Defensive First Team a record nine times.

With the Warriors’ breakout season, Payton II should be taken into account defensively in the Finals.

He may not be able to steal the spotlight from his famous dad in that clothing, but Payton II will still try to establish a name for himself on the NBA’s greatest stage.

XRX Has Issued A Quarterly Dividend Of $0.25

WWE Extreme Rules 2021: The Results And The Bizarre Endings Of The Event