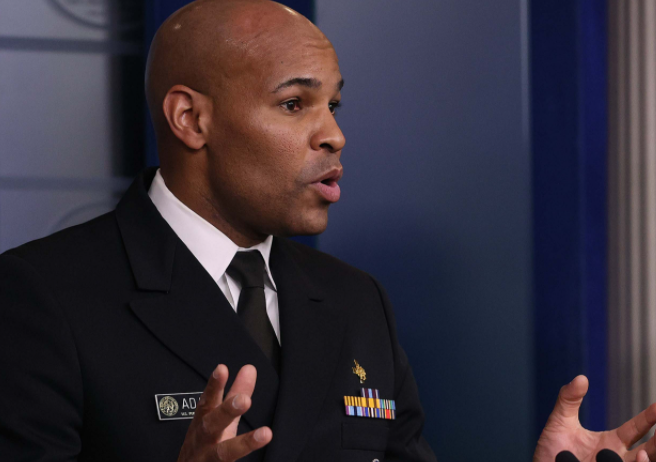 The Former Surgeon General, Jerome Adams, who served under Donald Trump, has spoken out on the guidelines issued by the Centers for Disease Control and Prevention (CDC). The CDC has recommended that people afflicted with the COVID-19 virus who are asymptomatic may end their isolation after only 5 days.

Jerome Adams served under Trump for 5 years from 2017. He was a leading member of Trump’s task force created to tackle the virus. He said that citizens should be advised to take the antigen test plus confirm a negative outcome for the virus before concluding their quarantine.

Dr. Adams also spoke of his extraordinary respect for the center but said that he felt that even people working there would not be following the fresh guidelines when it came to their families.

Jerome Adams revealed that he loved the CDC and grew up with the dream of working there one day. He says that he had always been among the most ardent supports of the center. He said that he had never foreseen that he would be advising people to ignore their guidelines.

Adams said that speaking to them would reveal that they avoid the guidelines even for their family.

Jerome Adams comments come after the agency cut the recommended isolation period by half from the previous advice of 10 days for COVID-positive people who are asymptomatic.

The CDC has declared that the revised recommendations were based on scientific evidence that revealed that the maximum transmission was during the early stages of the infection.

Dr. Fauci has recently said that the new guidelines were set after a study of the new Omicron variant of the virus. He emphasized that there was a need to help the economy along.

The top infectious diseased expert in the US said that people must avoid crowding as there has been a spurt in cases after the detection of the Omicron variant. But he said that people can go back to their jobs if they are asymptomatic, especially those holding essential jobs.

Shutdown Made Me Realize Physical Casinos

States Move In With Stimulus Checks As Washington Stops At $5T In Federal Relief...

Federal stimulus checks approved by Congress began even as the nation went into a prolonged lockdown in 2020. It unleashed the largest flood of...

Delaware To Send Rebate Stimulus Checks In Multiple Phases In The Coming Year: $300...

Last week, Lawmakers in Delaware pushed through a rebate measure to provide every resident of the state a one-off direct stimulus check worth $300...

When the COVID pandemic was at its peak, the federal government had gone ahead and issued several trillions of dollars in stimulus check money....