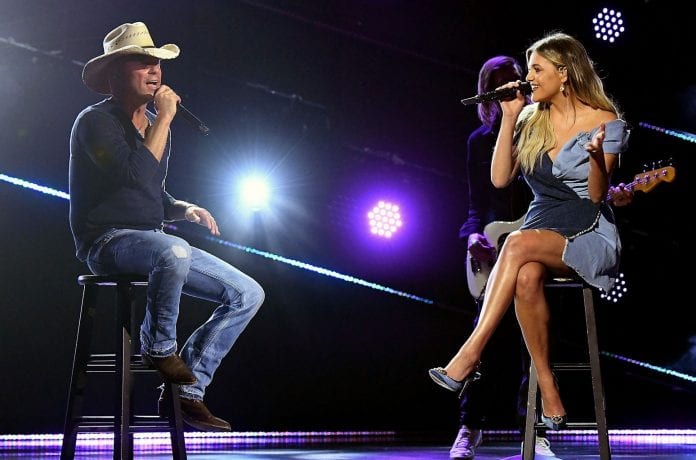 Kenny Chesney, the American singer and songwriter, gave a performance at the 56th Annual Academy Awards for the genre of country music. It took place this Sunday. The singer was accompanied by another American singer, Kelsey Ballerini. Together they performed one of the hit songs, Half of My Hometown.

Both the singers followed the protocols of coronavirus as they gave their performance. They sang while sitting on their respective stools that were placed keeping in mind a healthy distance. While they performed, an array of colorful lights were thrown out highlighting the beautiful duet.

The 27-year-old Kelsey Ballerini released one of her hit songs this Friday. The song had made an appearance on “Kelsea,” her album. It was released in the month of March.

Prior to her performance with Kenny Chesney, Ballerini took to the social media platform, Instagram, to share a picture of herself. The picture revealed her in a beautiful gown. The caption she gave to her picture was, “Turning music city emerald.”

Several days before the award show, Ballerini took to Twitter to express how she felt about getting a chance to perform with Kenny Chesney. In her Twitter post, she tagged the 53-year-old singer. The 27-year-old singer shared with her followers that she was extremely excited to debut her track with the legendary singer. The singer also revealed the fact that she might end up shedding some tears owing to the excitement.

Just after the performance of Ballerini and Kenny Chesney, the award for the category of the “album of the year,” was given out. It was won by the singer, Chris Stapleton. He won the awards for his album, Starting Over, which was a hit. In his speech, he extended his gratitude towards his wife, Morgane.

Chelsea Owner, Roman Abramovich, Gives Up Stewardship And Care Of The Club