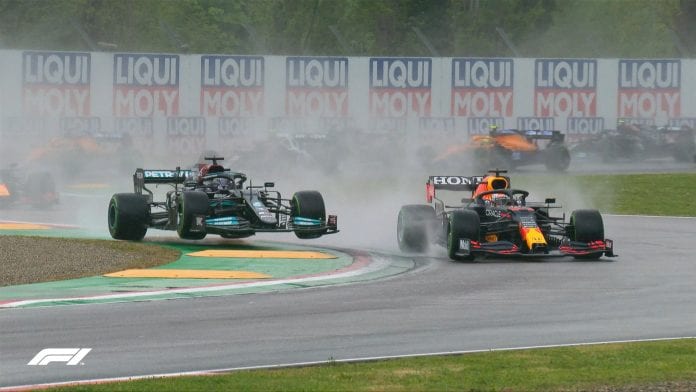 The rain swept Imola circuit saw a major upset as the action began right from the start at the Formula 1 Grand Prix at Emilia Romagna. But the action on the circuit was anything but dampening. Verstappen shot into the lead right at the start from his third-place lineup.

There was a heavy crash involving Nicholas Latifi of Williams, and the Safety Car had to be deployed on Lap 2.  The race had to be red-flagged when his teammate George Russell was part of a huge crash along with Valterri Bottas of Mercedes at Tamburello.

Verstappen managed to hold onto his lead after the restart. Lewis Hamilton had a forgettable race as his car scrapped into the barrier with the front wing while getting back onto the track just before the red flag was on. He was down to 9th place and tried a heroic comeback on the famed Formula 1 circuit.

The Red Bull title contender was facing pressure from the Mercedes star at the pit. But Hamilton’s error that saw him slide, pushed him almost a lap down.

The red flag was at lap 32 as there was debris from the two damaged cars. The incident was not pinned on either driver and was passed off as a racing incident. Both drivers were not cautioned.

The red flag was at an opportune time for Hamilton as one of the greatest Formula 1 star had time for repairs to his car. He could join the race from the start and began making a heroic effort to edge back to the top.

It took just 5 laps for Hamilton to crawl back to the top 5. By the end of the Formula 1 race, he had recovered enough for a podium finish. In the final moments, he managed to overtake second-placed Lando Norris. He also bagged the bonus for the fastest lap. He thus managed to stay ahead of Red Bull’s Verstappen in this edition of the Formula 1 Championship.

Norris managed to hold on for the final place on the podium. The fourth and fifth positions both went to the Ferrari team.

Factors to Consider When Selecting an Online School