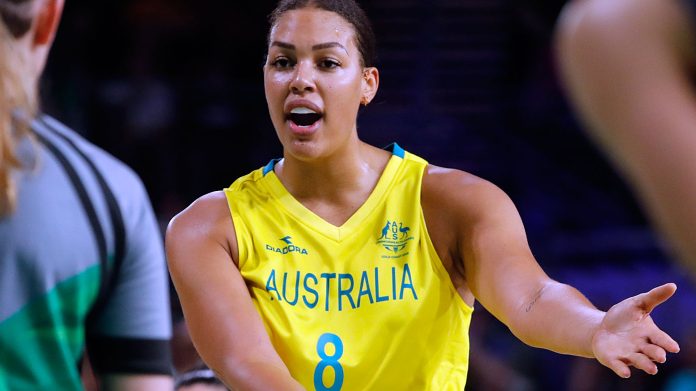 Liz Cambage, a WNBA standout, sent an open letter on Instagram disputing claims that she anointed Nigerian players as “monkeys” during a drill ahead of the Tokyo Olympics in 2021.

After alleging mental health issues, the WNBA standout unexpectedly parted company with the Australian Opals just days before the Tokyo Olympics over a year ago. However, according to recent reports, Cambage’s time with the women’s national basketball team of her country came to an end when a closed-door scrimmage against Nigeria became nasty.

According to the footage, the 6-foot-8 center was involved in a tense post brawl during the now-famous July 13 match.

Liz Cambage Is Disappointed With The Continuous Accusations

Liz Cambage resorted to swinging an elbow at her opponent’s chest as her team trailed and her irritation escalated, leaving Nigerian center Victoria Macaulay with a severe gash above her collar bone. Following a brief timeout, Cambage and another player apparently got into an altercation. Cambage struck an opponent across the face not long after the first play, which one Nigerian player described as “malicious.”

Liz Cambage erupted with a racial diatribe when the athlete retaliated with her fists. Several players on both sides claim they overheard her telling Nigerian players to “return to your third-world nation,” while others claim she called them “monkeys.” The Australian basketball player stated the matter was dealt with discreetly about a year ago and voiced her dissatisfaction with the ongoing allegations.

Following the confrontation, Australian authorities allegedly called the game off early, for which Cambage apologized. After Nigerian players talked to the investigators, the subject is still being rehashed. Cambage, whose father is Nigerian, claims she never shouted racist insults throughout the altercation. Cambage went on to give her side of the events after that. She alleges she was punched in the face, but she walked away and discussed her mental health. She concluded her remarks by apologizing to the Nigerian team for the portion of the tale for which she bears responsibility. Cambage is on her fourth WNBA team in six years and is in her debut season with the Sparks.

The Stimulus Checks Had Its Good And Bad Moments: What Lies Ahead?

Trevor Bauer Being Picked Out; Dave Roberts Of Dodgers Outraged At The Sticky Situation