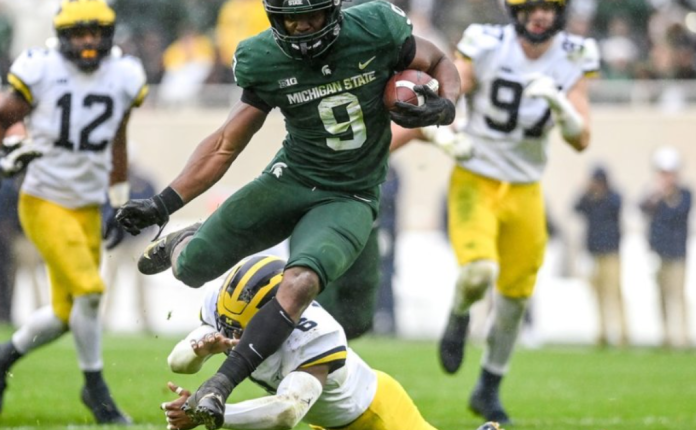 Michigan State brought in a quality prospect to their recruiting class of 2023. This time they have filled the quarterback position with 3-star native Bo Edmundson now a Spartan Class member. Edmundson is a Lake Travis product. Michigan State also moved from 9th to 5th in the recruiting rankings of the 247Sports Composite.

Edmundson is the 5th commitment of Michigan State’s class of 2023 and is the 3rd out of the state. He joins Andrew Depaepe Iowa’s defensive end and fellow Texan, running back Kedrick Reescano.

Edmundson Commitment To Michigan State Takes Team To 5the Position

Though it is early to comment, Edmundson’s commitment to Michigan State takes the 2023 class of Spartans to the 5th position in the overall Composite ranking, according to 247Sports.

Edmundson was in East Lansing in the last week of January. He was recognized as a top potential at that position for Tucker. He decided to stick with the Spartans at opportunities from Colorado, Kentucky, Houston, Oklahoma State, Pittsburgh, Penn State, Utah, Purdue, Wisconsin, and West Virginia among others.

Edmundson exclaimed that stepping on campus felt just like home. He said that he was excited as Michigan State was building something exciting.

It has been an 11-2 season from Michigan State and they finished at 9th in the AP Poll.

They have also signed class No. 23 in the 2022 cycle. That momentum appears to have carried over to Bo Edmundson’s class.

Edmundson said that he felt relieved after talking to Coach Tucker and letting him know of his commitment. Jay Johnson, QB Coach, had a leading role for the 185 pounds, 6-foot-3 Edmundson. The latter said that he was very excited to be playing for Johnson.

Jacob Roloff Is Too Excited To Be A Father

Boston Bruins Comes Out Ahead Against Washington In Game 2

Bed Bath & Beyond (BBBY) acknowledged active focus on shares in the last trading session.The stock disclosed a change of 1.19%...

Esports Entertainment Group, (GMBL) observed an average volume with 15843.03K shares and exchanged 23003624 shares on hands in most recent trading...

Faraday Future Intelligent Electric (FFIE) observed an average volume with 39834.81K shares and exchanged 56033484 shares on hands in most recent...

Advanced Micro Devices, (AMD) traded 58118608 shares on hands in most recent trading session and observed an average volume with 63620.77K...