Home Sports Novak Djokovic’s Case To Be Taken To A Higher Court On Jan... 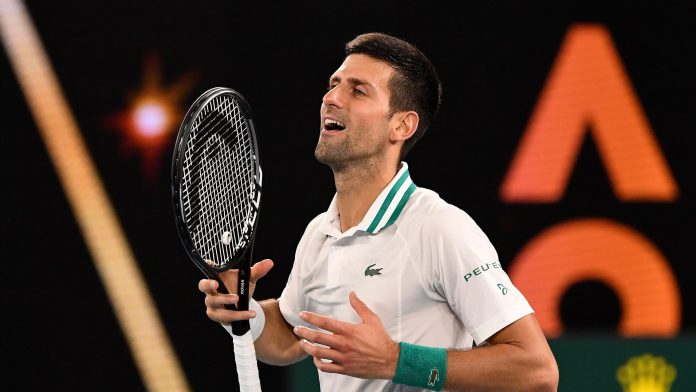 Novak Djokovic’s bid to compete in the Australian Open despite being COVID-19-unvaccinated reached the high court on January 15, when he challenged the second rejection of his visa.

Novak Djokovic, aged 34, was not visible on the public-access internet live for the 15-minute procedural hearing, which started just two days before his first match of 2022 at Melbourne Park.

Judge David O’Callaghan ordered that Djokovic’s and the government’s attorneys would have to submit written arguments later on January 15, and he set another hearing for January 16.

The Serb’s visa, which had been canceled when he arrived at a Melbourne airport last week, has been stopped by Immigration Minister Alex Hawke. However, a court reinstated it for improper procedural reasons on January 10 since Djokovic was not allowed to have counsel with him at the airport.

Expulsion from Australia may result in a 3-year restriction on coming back to it, however, this can be waived in some cases.

Novak Djokovic admitted that his journey statement was erroneous because it neglected to mention that he had visited various nations in the 2 weeks leading up to his coming to Australia.

He has a total of nine Australian Open victories, including the last 3 in a row, as part of his 20 Grand Slam wins. He is tied for the highest number by a male in history with Rafael Nadal and Roger Federer.

Novak Djokovic has decided to use the covid positive test he claims he took on December 16 to obtain medical immunity allowing him to bypass the vaccination requirement because he already has COVID-19.

If Novak Djokovic plays a match — or more — before being notified he can no longer compete in the competition, his next opponent will simply move to the next round, with no substitute.