A former junior staffer from Democratic presidential candidate Joe Biden’s Camp accuses him of sexually assaulting her back in 1993.

Biden’s office stays firm and refutes the allegation denying anything of that sort ever happening.

The former junior staffer, Tara Reade told her story in a number of interviews with NPR. Some details of the alleged incident were also accounted for by her brother and a friend who wished to remain anonymous.

Reade said that the incident took place when she was told to hand over a duffel bag to Biden in the Senate office building back in the spring of 1993. Biden allegedly pushed her up against a wall and penetrated her vagina with his fingers.

She had filed an FIR with the D.C Police Department, details of which have been obtained by NPR.

Reade first revealed her story back in 2019 on The Katie Halper Show accusing Biden of sexual misconduct. Although her previous account is much different than what she recently revealed. Lucy Flores, a former Nevada state legislator, has also spoken out publicly about Biden’s invasive personality.

Reade also revealed that she had reported the incident to three people in the staff. All three of them, including Dennis Tomer, his then-chief of staff, say they don’t recall any such incident.

Where to shop using cryptocurrency

The Economic Impact Payment has turned out to be the last of the federal stimulus checks, at least for now. But people continue to... 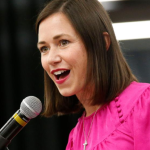 On Friday, Donald Trump backed Katie Britt for the U.S. Senate race in Alabama, digging down on his decision to reject his previous choice...