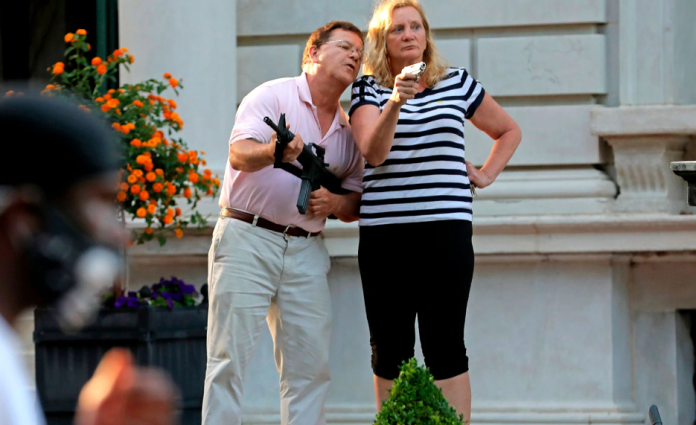 On Monday, the Supreme Court declined to pick up the case that was brought up by Mark and Patricia McCloskey- the Missouri Republican Senate candidate. The couple was seeking review for the professional disciplinary action that they had faced- when they decided to point guns at the racial justice protestors outside their home in St. Louis.

Incidentally, there were absolutely no noted dissents to the move of the court when they refused to grant the case. The couple had already faced major disciplinary action from the Supreme Court of Missouri the previous year- after they had to plead guilty related to the incident that took place in June 2020.

Goes without saying, the Supreme Court of Missouri had apparently found the conduct of Mark and Patricia McCloskey quite reprehensible- which also amounted to moral turpitude which deserved professional legal sanction. But the couple had put up a petition which they submitted to the US Supreme Court the previous month, where they argued that the conduct was completely protected under the Second Amendment, and could never be deemed the type of moral turpitude that warranted any form of disciplinary action.

The request from the McCloskeys was considered a major longshot- with the Missouri Office of Chief Disciplinary Counsel waiving its liability to respond to Mark and Patricia McCloskey. As it stands, Mark McCloskey will be running in the Republican Primary for a Missouri seat in the US Senate- but has not yet been considered to be a frontrunner.

The very images of Mark and Patricia McCloskeys brandishing their weapons at the protesters became massive national news during the wave of Black Lives Matter protestors in the wake of the death of George Floyd. Most of the demonstrators had been going down the private street in front of the mansion of the McCloskeys’ to protest the decision of Lyda Krewson- the then-Mayor of St. Louis- who wanted to publish the names and addresses of people that were in favor of police reform.

Pattie Boyd: From The Archive