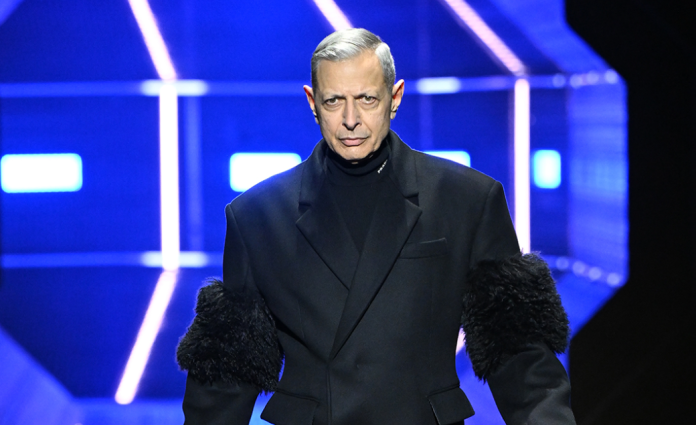 Prada called on Hollywood stars Jeff Goldblum and Kyle MacLachlan to bookend its catwalk on Sunday afternoon, bringing a close to a quiet menswear fashion week that saw multiple brands cancel their shows in light of increasing Covid cases across Europe.

The appearance of the actors at the Fondazione Prada punctuated the second physical catwalk show from founder Miuccia Prada and her co-creative director Raf Simons since the latter came on board in early 2020, marking an unprecedented union of two of the fashion industry’s most influential and famed designers.

Prada’s Output Has Been Critically Acclaimed

The fruits of their collective output have so far proved to be critically acclaimed and this autumn/winter 2022 collection had the hallmarks of the same.

Taking the concept of uniform as their stimuli, Prada and Simons elevated boiler suits in silk tech, leather and cotton, and blurred rose-print – replacing “the traditional historical shirt/tie/bow tie and giv[ing] a new energy and reality, a younger attitude also,” said Simons.

Outerwear loomed large in trench coats and utilitarian parkas with shearling panels. Elsewhere, the accessories that will get the social media universe buzzing arrived in compartmentalized backpacks, fluorescent gloves, and miniature pocket belts in the signature Prada triangle.

“The collection celebrates the idea of working – in all different spheres and meanings,” said Prada, emphasizing the idea of the importance of formal work and the wardrobe she imagines represents it. “Through these clothes, we emphasize that everything a human being does is important. Every aspect of reality can be elegant and dignified … elevated, and celebrated.”

Carlo Capasa, president of the governing body of Italian fashion, the Camera della Moda (CNMI), said that while he respected Armani’s personal decision, it was important to find ways to push on with live events that facilitate face-to-face interaction and drive revenue into the Italian fashion industry.

LeBron James on kneeling protest during national anthem: ‘I hope we made Kap proud’