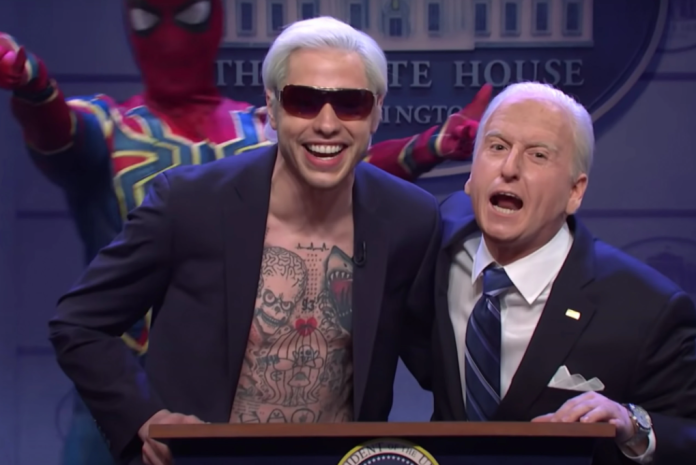 “We’re in the middle of a cold, dark winter,” James Austin Johnson as President Joe Biden said kicking off this weekend’s “Saturday Night Live.” “This winter is so dark, Republicans don’t think it should vote.”

He also added that there was one way to make all of this go away.

“Stop seeing Spider-Man,” Johnson’s Biden told the American people. “Think about it, when did Spider-Man come out? December 17. When did every single person get Omicron? The week after December 17.”

After stating this on Saturday Night Live, he started taking questions from the press.

Ego Nwodim’s reporter asked if he was really blaming the Omicron variant of coronavirus on “Spider-Man: No Way Home,” which broke box office records last month.

Johnson’s Biden replied that he did not want people to stop going to the movies, he only advised them to not watch Spiderman. They could watch anything else.

He explained that he, for example, saw the first half hour of “House of Gucci” and that was “enough movie for anyone.”

Another reporter, played by Heidi Gardner, asked if this theory was based on any kind of data.

Johnson’s Biden then said he hasn’t seen the movie because he couldn’t get tickets.

Yang’s reporter asked about problems with testing and the rise of cases.

Pete Davidson then showed up in Saturday Night Live from a different universe as the real Joe Biden saying that this universe was about to collapse.

Micah Downey the Star of ‘Bride and Prejudice’ died at 26, ex confirms

Poland and Hungary Use Coronavirus to Punish Opposition