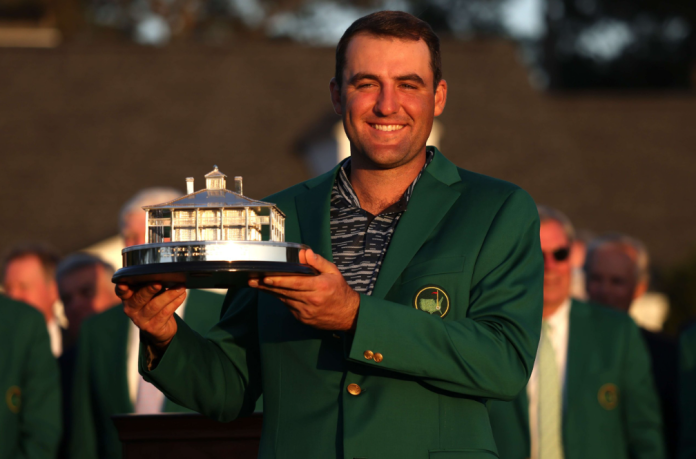 Scottie Scheffler withstood one of the finest rounds in Augusta National’s fabled history to etch his name into folklore as a world No 1 who has won the Masters.

Scottie Scheffler stood on the 18th tee with a five-shot lead in the 86th staging of this event. The stuff of dreams. A subsequent double bogey which included a bizarre four-putt mattered not a jot.

McIlroy’s race had looked run as he played from bunker to bunker on the tournament’s 72nd hole. Instead, the Northern Irishman holed out from the sand. The subsequent delirium of McIlroy and the galleries will linger as a moment for the ages. His 64 matched the lowest final round ever recorded in the Masters. His second place represents a career-high in this major.

Yet this was Scottie Scheffler’s day; just as it has been his year. What he may lack in personality he makes up for with iron accuracy that defies what pressure should do to even professional golfers.

Scottie Scheffler Comments On His Victory

“I have dreamed of being here and competing,” Scheffler said. “Friday is the first time I actually thought about winning. I cannot speak highly enough of this place. It’s amazing that I will be able to come back so often. In a way I’m glad I messed up the last, it has made me a little less emotional speaking now.”

There is always a moment. For Scheffler, it arrived at Flowering Peach, Augusta’s 3rd hole. Cameron Smith, looking to become the only player other than Tiger Woods to win the Players Championship and Masters in the same year, had reduced Scheffler’s three-stroke lead by two-thirds inside two holes. Scheffler had found trouble on the 3rd, from where he could only leave an approach short of the green. What followed was like a heavyweight boxer’s blow to Smith and further proof that everything Scheffler touches in a professional context, for the time being at least, turns to gold.

News About Russia And Ukraine On 29th March