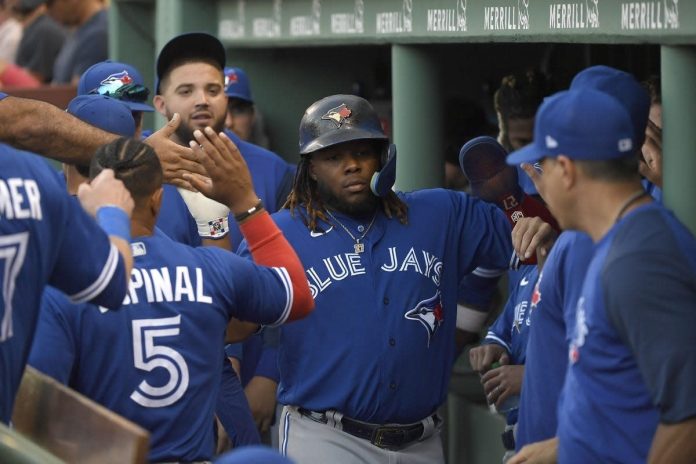 No lead is secure at Boston’s Fenway Park, according to a popular saying. For the Red Sox, Friday night was a rare — and unpleasant — exception as they quickly fell behind and never recovered against a rampant Toronto Blue Jays side.

The Boston Red Sox were defeated by the Toronto Blue Jays in a game that set a record with a score of 28-5 after Raimel Tapia hit an inside-the-park grand slam to end the seventh inning after Jarren Duran made a costly error in center field.

The previous Fenway Park record for most runs scored by a visitor was 24, set by the New York Yankees in a 24-4 victory on September 28, 1923, and matched on May 1, 1929, by the Philadelphia Athletics in a 24-6 rout. In both of those seasons, the Red Sox had the worst record in the American League.

The Associated Press stated that Toronto came within two runs of breaking the current big league record for runs in a game but left two runners on base in the top of the ninth inning. Yolmer Sánchez, an infielder for Boston, pitched the ninth inning.

According to Retrosheet.org, the Texas Rangers’ 30-3 thrashing of the Baltimore Orioles at Camden Yards on August 22, 2007, set the modern record for 30 runs in a game.

The Blue Jays, who established a franchise record for runs scored in a game, were led by Danny Jansen, who hit two home runs and knocked in six. According to Retrosheet.org, the Blue Jays’ prior record was 24, which was achieved on June 26, 1978, when they played Baltimore at Exhibition Stadium in Toronto.

According to the Star, Lourdes Gurriel Jr. tied a Blue Jays record set by Frank Catalanotto against the Chicago White Sox on May 1, 2004, with six hits.

Retrosheet.org reports that the last time the Red Sox gave up more than 27 runs in a game was when Boston lost to Cleveland 27-3 in the opening game of a doubleheader on July 7, 1923, at Dunn Field.

The Blue Jays concluded the day with 29 hits, another franchise high, with every player in the starting lineup getting at least two hits.

The Red Sox sent out the third baseman Yolmer Sanchez to end the farce after Toronto scored one run in the first, two in the second, seven in the third, four in the fourth, 11 in the fifth, two in the sixth, and one in the ninth.

In the contest, the Red Sox utilized seven pitchers. Only relievers Jake Diekman and Hirokazu Sawamura did not allow a run.

Andrew Yang Backs One In New York After ‘Breakup’ With Democrats

Factors to Consider When Selecting an Online School