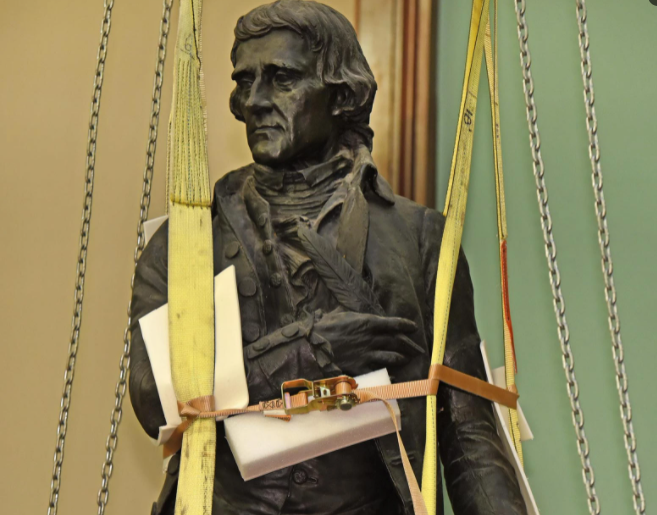 A landmark at New York’s City Hall is set to be removed after staff complained that the statue of the slave-owning third president made them uncomfortable. The Thomas Jefferson statue was removed after 187 years at the request of the Commission on Racial Justice and Reconciliation.

The Commission is led by outgoing Mayor Bill de Blasio. His wife Charlene McCray was among those who protested at its presence, as they felt that it honored a slave owner.

Calls for the removal of the Thomas Jefferson statue intensified after the murder of George Floyd in the summer of 2020.

Thomas Jefferson was the 3rd President of the United States and is famous for saying that all men are created equal. But he owned over 600 slaves during his lifetime.

Before a decision was taken by the commission on removing the Thomas Jefferson statue, Eric Adams, the Democratic candidate for the post of mayor, said that the commission would consider uplifting underrepresented faces and communities.

The co-chairman of the Latino, Black, and Asian Caucus, Daneek Miller said that the Tomas Jefferson statue did not represent contemporary values and thus it had to go.

The Thomas Jefferson statue was finally removed by art handlers from its pedestal located at the City Council chambers. The art handlers were from Marshall Fine Arts.

Efforts to have the Thomas Jefferson statue have been going on for decades. the statue is a replica in plaster of the original bronze one located inside the rotunda at the US Capitol.

The initial voting to have the Thomas Jefferson statue removed was in October. Councilmember Adrienne Adams, who is also the co-chairperson of the caucus, said that the founding President was a slave-owner who had over his lifetime retained over 600 slaves. She said that the presence of the statue was an homage to a slaveholder.

Fred the Godson Has Died After Contracting Coronavirus