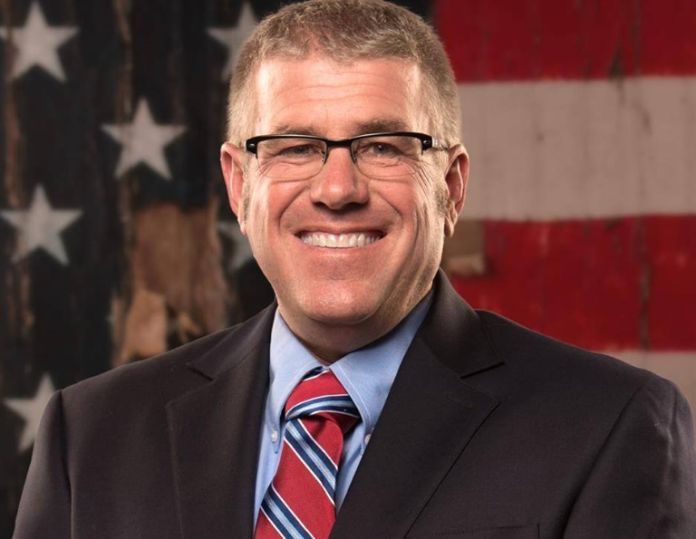 Trump also reaffirmed his support for the “ultra-MAGA” downstate Republican Mary Miller in her carefully watched primary contest against fellow Republican Rodney Davis, who enraged the former president with his vote in favor of creating a Congressional panel on January 6.

However, Miller made what appeared to be a significant racially charged error when she credited Trump for Friday’s U.S. Supreme Court ruling striking down abortion rights and referred to a “victory for white life” as well as an earlier court decision virtually eliminating state laws on concealed carry.

Trump praised Miller before introducing Darren Bailey as “the next governor of the wonderful state of Illinois,” to cheer “Bailey, Bailey, Bailey!” from the audience.

After that, when Bailey and Trump were posing for pictures backstage, Trump began to tell an anecdote that appeared to be spontaneous.

The former president praised Darren Bailey for being “a fighter and…outstanding warrior in the Illinois state Senate, where he’s fully, totally revered by all of them,” and said he will be tough on crime and lower taxes.

While attending a fundraiser at the former president’s Mar-a-Lago property in Florida with Miller, Darren Bailey had been pursuing Trump for many weeks. The governor-elect posed with Bailey for a picture, which he soon shared on his social media.

However, he had to wait until Saturday to hear Trump’s entire statement, which might have a game-changing effect on Bailey’s five other opponents. According to a WBEZ/Sun-Times poll, Republican voters in Illinois largely support Trump.

Another Republican contender, Sullivan, responded to the presidential snub by mocking Darren Bailey and the barrage of television advertising funded by Pritzker and the Democratic Governors’ Association that helped the state senator surpass Irvin in the polls. Irvin’s $50 million in contributions from billionaire Chicago hedge fund manager Kenneth Griffin were partially offset by the Democratic commercials.

Pritzker’s team posted a video message from the governor on Saturday before Trump took the stage, calling him “racist, homophobic, xenophobic [and] misogynistic.”

On Tuesday’s ballot in Illinois, Trump singled out only Bailey and Miller as Republicans. He didn’t mention any of the seven Republican candidates running this fall to unseat Democratic U.S. Sen. Tammy Duckworth.

Trump made his first remarks in public about Friday’s historic abortion decision by the Supreme Court, which was supported by three of his appointments and resulted from their unanimous vote to overturn Roe v. Wade. This was almost immediately after he took the stage.

Chuck Grassley Will Be Standing Against Jim Carlin, If He Does Not Retire

Stimulus Check And Other Payments: IRS Sending Letters To Those Yet To Get These...