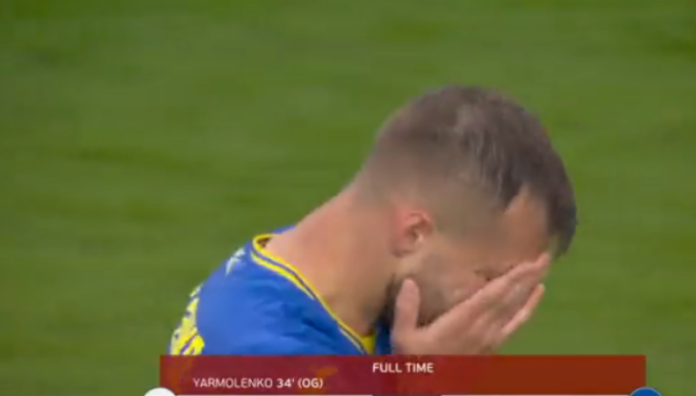 Ukraine had seen the war shatter millions of lives and after 15 hours of Russia renewing its assault on Kyiv, a Ukrainian captain dug his face into Welsh grass, defeated.

Ukraine’s unlikely run at the World Cup was ended by an own goal scored by Andriy Yarmolenko. Wales qualified for Qatar with a 1-0 victory against Ukraine on Sunday in Cardiff. They will play the United States on the tournament’s opening day.

While Gareth bale and his teammates celebrated, Yarmolenko remained on the ground for what seemed like an eternity. Finally, he got to his feet, soaked through with heat and rain, and went back toward midfield, ready to play again.

Ukraine Pushed On For The Equalizer

His Ukrainian teammates boosted his morale, and the squad made a quick comeback. They kept going forward, trying to score against the Welsh, but they were unable to tie the game.

Despite Oleksandr Zinchenko‘s free-kick goal, play was restarted because the referee had not yet sounded his whistle.

At one point, Ruslan Malinovskyi and Viktor Tsygankov were within striking distance of tying the game. Mykola Shaparenko skewed an attempt just wide, and Artem Dovbyk needed a diving stop from Hennessey to avoid an equalizer.

In the 92nd minute, Yarmolenko took another shot from 20 yards out but missed the goal.

Ukraine was dogged and, for the better part of 95 minutes, very unfortunate.

But they were and are eternal symbols of a unique Ukrainian culture and a sovereign country that Vladimir Putin is seeking to destroy. Downhearted that they won’t be able to share their message with millions of people in November, they huddled on the soggy grass.

They were and are extremely proud Ukrainians, and their people will be too. On Sunday, they bravely entered the Cardiff City Stadium with oversized blue and yellow banners. They gave a thumbs up to the crowd, who was chanting not just for them but also for the Ukrainian military, which was fighting off a Russian invasion back home.

Top 3 Dos And Don’t When You Quit Smoking

State Offering More Than Stimulus Checks: 12 States That Will Not Tax You Retirement...