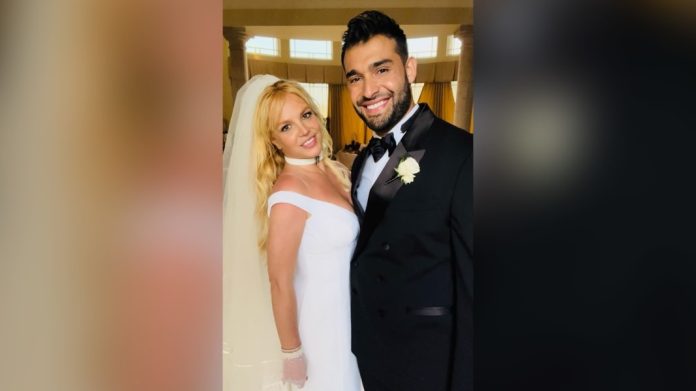 It’s been confirmed! Sam Asghari and Britney Spears have married. Drew Barrymore, Madonna, Paris Hilton, and Kathy Hilton were among the 60 guests in attendance. According to the outlet, her mother Lynn, father Jamie, and sister Jamie Lynn were not planning on attending.

Spears reportedly wore a Versace gown and went down the aisle to Elvis Presley’s “Can’t Help Falling in Love,” according to insiders.

Spears, 40, had been planning her wedding day for about nine months, according to a source ahead of the festivities. On Mother’s Day, Spears teased her wedding with a photo of her veil.

Sean Preston, 16, and Jayden James, 15, were not there for the wedding, but a lawyer for Kevin Federline told PEOPLE on Thursday that they are “glad” for their mother.

After meeting on the set of the singer’s “Slumber Party” music video, Spears and Asghari were romantically linked. After her video shoot, Spears revealed in a 2017 radio interview that it took roughly “five months” for her and Asghari, 28, to reunite.

The couple got engaged in September, just days after Britney Spears’s father Jamie filed a petition with a Los Angeles judge to end his conservatorship, which has given him control over the pop star’s estate since 2008.

Spears might have legally married, but the wedding, like all important life decisions, had to be approved under the conservatorship (which was ended in November after 13 years).

Asghari and Britney Spears began suggesting that they had already married in early 2022. In multiple Instagram photos, the pop artist referred to her boyfriend as her “husband.”

The “Toxic” singer confirmed her third pregnancy on Instagram on April 11; she and her ex-husband Kevin Federline have two sons, Sean Preston and Jayden Federline. Britney, on the other hand, confirmed that she had miscarried on May 14 with what would have been her and Sam’s first child together.

The day, however, was not without incident. Jason Alexander, Spears’ ex-husband, was detained earlier Thursday after attempting to disrupt the ceremony.

Stimulus Check Update: The Numbers Are Proof That It Is Not The Right Time...