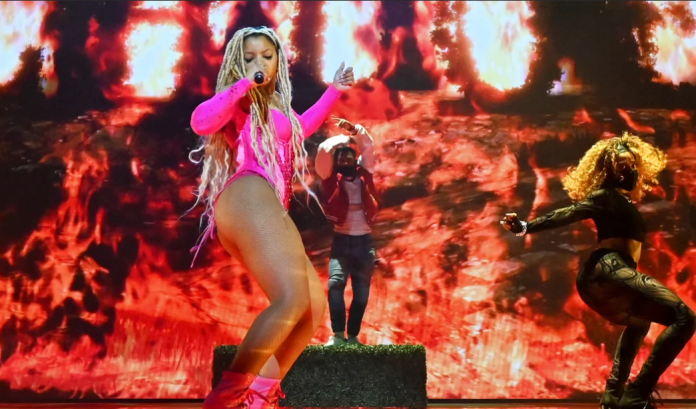 Chloe Bailey made her debut as a performer at the VMAs 2021 and the debut was quite memorable. It was brilliantly produced by the artist.

Chloe Bailey performed “Have Mercy” in a pink get-up and was flanked by dancers. She was completely natural and matched the dancers step for step. She moved just like a seasoned professional.

It was like comparing the piece with Beyonce and Britney Spears, one of the highest degrees.

The Performance Set By Chloe Bailey Was Of The Highest Standards

The aesthetics were quite marvelous and would make Rihanna and Lady Gaga proud. Chloe Bailey started her Halloween season early. She had spooky backdrops and scary lighting while she performed with her dancers.

The performance felt quite special. It was like an artist was coming into her own and presenting herself in front of the entire world. The Twitter platform went crazy and many fans took to the platform to praise Chloe Bailey. Doja Cat and Normani were also praised and crushed their numbers too.

Chloe Bailey is releasing her solo album soon. She had made music with her sister as the dua Chloe x Halle, but this was her solo debut.

Chloe Bailey stated that producing alone felt quite scary in the beginning as she looked up to her sister for her approval. Now it is just her own voice.

She stated that she does not feel pressure when it comes to accolades and awards but feels it when she tries to make herself proud. She wants to make sure that she sings and says the things that she wants. She does not think about how people would react to her music, as it is different from what she used to create with her sister. She feels that she is okay and will be so, as long as she is following her purpose.

Chloe Bailey had won several hearts in the MTV VMAs and people are waiting excitedly for the new debut solo album that will be releasing soon.