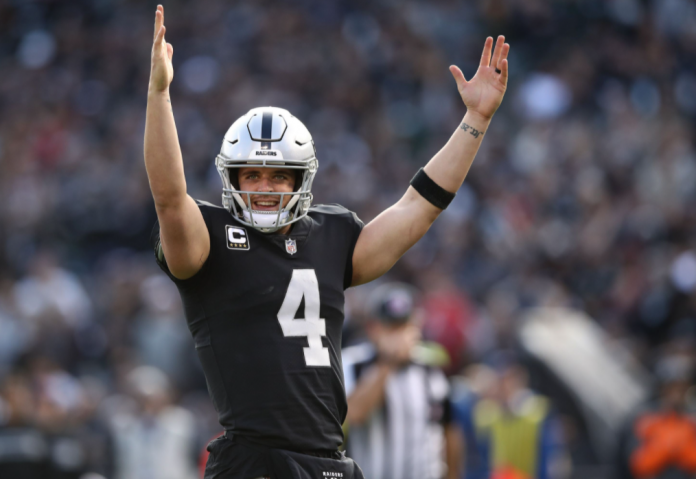 The Las Vegas Raiders’ wide receivers were quite underwhelming against the Ravens.

QB Derek Carr relied on his target, TE Darren Waller, from the beginning of the game and Waller has targeted a total of 19 times.

It is obvious that the Raiders would have failed to win if it wasn’t for Derek Carr and his production wideout when it counted.

Derek Carr States How Jones And Edwards Stood Out

Jones was wide open on the game-winning touchdown in overtime and Edwards came through with three big catches late in regulation and in overtime.

Carr stated that Zay was like his brother and considers him to be family. He gets him up early for training so that he can spend time with his family and Zay never disappoints him. It doesn’t matter what the situation is, Zay is always there for him.

Zay will always remain as his family regardless of the fact if he catches the ball or not. Derek Carr got a chance to celebrate him and his success after his perfect catch. Zay had a tough time in Buffalo and seems like he found his home. Carr wants him to remain in the team as the fans and the atmosphere feels perfect with him around.

Derek Carr also spoke about his other teammate, Edwards. He said that he trusts him completely. He tried his best to buy time after learning it from the game films and how a couple of teams were playing against him. All he did was to buy time in his pockets.

The game has evolved a lot and Derek Carr states that he can buy time and still find the guys he was looking for. Coach Gruden and Oly had pushed him into getting this ability better.

This group of players need to come through in the clutch, then only can they be a special unit in 2021.

While Jim Harbaugh got a lot of praise after Michigan’s upset with Ohio State, it was John Madden’s text message which elevated the mood....

Manchester City is looking like a true champion side. They are the team to beat this season. The team looks to get stronger with...

Manchester United did not perform up to their expectations last night. It was one of the biggest clashes in the English Premier League. They...

No Way Home: Tickets Are Out Now!

No Way Home would be one of the biggest releases of Marvel. After Avengers Endgame, this might be the movie that will make Marvel...

Jussie Smollett is a famous face in Hollywood. He was born on 21st June 1982. Smollett went on to become one of the best...