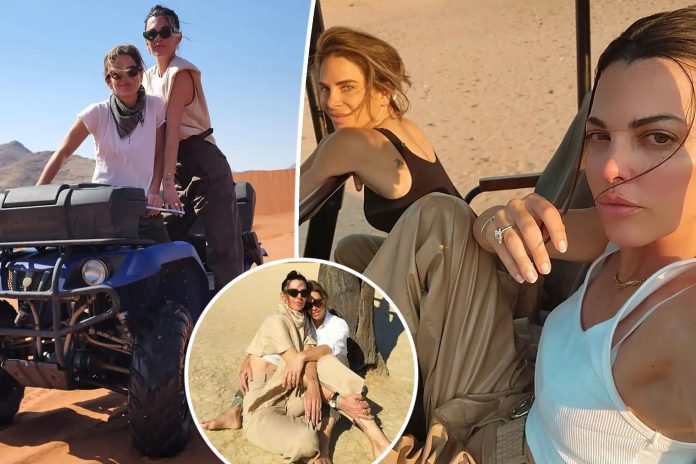 A secret wedding between Jillian Michaels and DeShanna Marie Minuto took place in Namibia. According to People magazine on Friday, the 48-year-old fitness celebrity and the 37-year-old fashion designer recently were married in the nation of southwest Africa.

The couple, who have been romantically involved since the end of 2018, really wed on July 11 at a Miami courthouse before departing for the private ceremony in Namibia, according to the tabloid.

Jillian Michaels added, a special thanks to Susan Neva at Alluring Africa, the crew at Wilderness Safari, and the Himba people for helping them honor their nuptials in style.

All-terrain vehicle (ATV) riding in the desert and even dancing with the locals were highlights of Jillian Michaels and DeShanna’s amazing wedding journey, which they have been sharing on social media.

Additionally, on June 23, 2023, they intend to hold a formal wedding ceremony in Venice, Italy. In November, the delighted pair revealed their engagement.

On the morning of November 21, the well-known personal trainer got down on one knee and proposed with a gorgeous seven-carat diamond engagement ring before posting a few adorable photos to Instagram.

“Here’s to thousands more,” She said after the 1153 days. She responded “yes.” Michaels captioned a cute selfie she took with her new fiancé.

DeShanna lifted out her palm to display the magnificent sparkler for a black-and-white photo that she uploaded to her Instagram account with the simple remark, “YES!”

According to PEOPLE, the fitness fanatic proposed to her three-year partner on Saturday morning with an “emerald cut diamond incorporating two single carats, trapezoid diamonds on either side.”

Heidi Rhoades and Jillian Michaels were previously engaged; their nine-year affair came to an end in 2018. They fought in court for joint custody of their two children, but their domestic partnership didn’t officially break until 2020.

Lukensia, their daughter, who is now 12 years old, was adopted from Haiti when she was 2 years old in 2012. The now-divorced couple received their son Phoenix, who is now eleven, the same month that Heidi gave birth to their first child.

In addition to paying an additional $2,000 per month for the kids’ schooling, clothing, and extracurricular activities, Michaels agreed to pay Heidi $2.4 million as an advance on their child support obligations.

Dr. Phil Employees Said That The Set Was A Toxic Workplace, The Show Denied...

You Need to Know this stock? Activision Blizzard, (ATVI)

Activision Blizzard, (ATVI) traded 145053 shares on hands in most recent trading session and observed an average volume with 0.0119K shares....