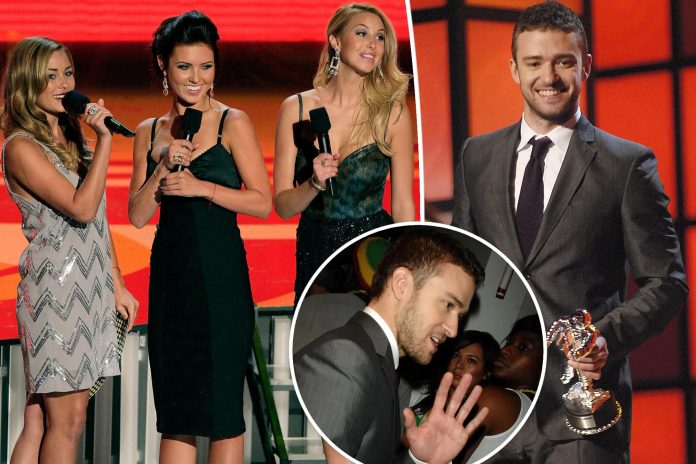 Audrina Patridge discusses the 2007 VMAs when Justin Timberlake publicly insulted them onstage soon after they gave him his trophy, in a hot extract about bizarre star moments.

The reality personality, 37, said that the singer of “SexyBack,” 41, displayed “rude, diva behavior” during the 2007 MTV Video Music Awards.

For background, Justin was to receive Male Artist of the Year from Audrina Patridge and fellow Hills celebrities Lauren Conrad and Whitney Port. Interestingly, Timbaland joined Justin on stage to accept the prize from the cast of The Hills and hand it to the singer when he was named the winner.

Lauren and Whitney were reportedly overjoyed when Justin Timberlake won since they were superfans, according to Page Six’s report on what Audrina Patridge said in her upcoming memoir: “I didn’t give a damn about him because his music wasn’t my style, but I was happy for them”.

Audrina Patridge Remembered That She And Lauren Both Felt Embarrassed

It’s interesting to note that Audrina’s recall is a little fuzzy there. While Chris Brown was mentioned by JT during his acceptance speech, it was actually his producer Timberland who accepted the trophy and gave it to the performer. However, she accurately quoted him! As if that weren’t awful enough, Justin stood in the middle of the platform and commanded the audience to play more dang videos on MTV. We don’t want to watch reality TV or The Simpsons.

Audrina Patridge recalled that she along with Lauren felt humiliated. That is reasonable. Years later, Lauren revealed to Us Weekly that she had been the biggest JT fan for so long and that particular moment had broken her.

He didn’t give a second thought to the possibility that the three young women on stage with him might be fans, or that this might be a significant event for them. We can understand a music enthusiast missing the days of nonstop music on MTV. How conceited can one become?

What was the bright side of that evening? meeting a pop star who is much more normal! Rihanna, we have guessed it right and she claims that it was a memory to last a lifetime.

GameStop Shares On The Surge Again Under Redditor Influence