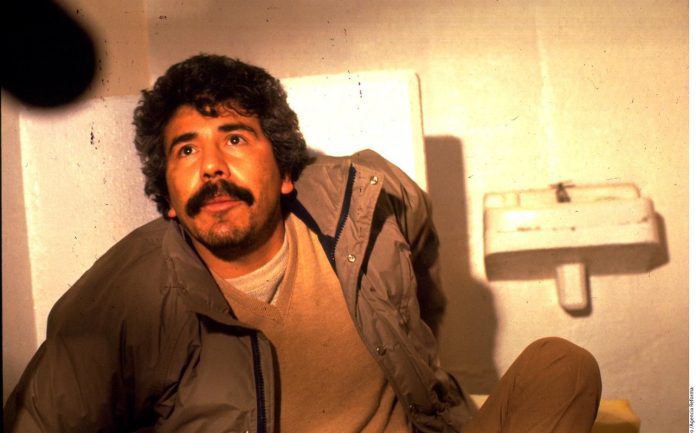 Rafael Caro Quintero, the notorious and temperamental drug long behind the brutal torture and killing of DEA officer Enrique ‘Kiki’ Camarena Salazar, was captured by Mexican law enforcement authorities after he returned to crime after his release from prison.

Kiki Camarena was instrumental in helping the DEA make deep inroads into the Mexican cartels. In February 1985, Camarena was kidnapped by drug traffickers hired by Mexican politicians in Guadalajara in Mexico. He was interrogated and tortured for days by the cartels of which Caro Quintero was a leading member.

Caro Quintero was arrested after being found in a brush by a search dog in San Simon town in Sinaloa state. It was a joint operation y the Attorney General‘s Office and the Mexican navy. The site was in the mountain bordering Chihuahua, north of Sinaloa.

Caro Quintero was arrested on July 15 at around midday. Two arrest orders are pending against him as well as an extradition request from the Americans.

Caro Quintero Could Be Extradited To The US

The Attorney General’s office in Mexico revealed that Caro Quintero was arrested for extradition. But he will remain at the Altiplano prison, a maximum security area, around 50 miles west of the capital Mexico City.

The Mexican navy released a short video grab that showed Caro Quintero dressed in jeans and a soaking wet blue shirt and a baggy khaki jacket.

In another development, 14 of the 15 people in a navy Blackhawk helicopter died in a crash near the coastal city of Los Mochis. They were part of the operation against Caro Quintero. The helicopter crashed shortly before landing after assisting in the operation.

Quintero had earlier been set free in 2013 after 28 years in prison after his 40-year sentence for the killing of Kiki Camarena was overturned by a Mexican Court.

The drug cartels control every part of the administration in Mexico, including the judiciary and the rot goes to the very top.

Jennifer Aniston Reveals Her Shock At Comment From Mathew Perry