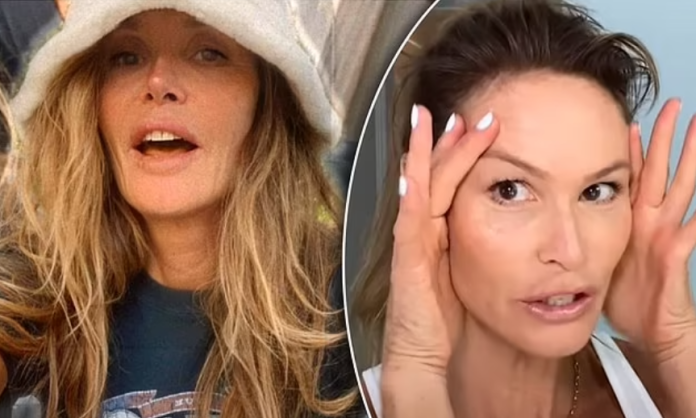 Supermodel and entrepreneur Elle Macpherson has been rightfully called out after she posted a video on Vogue in which she claimed she had ‘aborigine’ eyes. She is seen applying makeup and claiming that her black eyes are a result of her aborigine ancestry.

Elle Macpherson added that her eyes do not reflect light the same way as light eyes do, after being 7 generations of Australians. The screenshots of the video are in circulation though the original has been deleted.

Elle Macpherson’s sister, Mimi said that they were neither indigenous nor have they even traced their ancestry. She believes that they are in no way linked to First Nation ancestry.

But it wasn’t the claim of being a member of the indigenous Australians that has been called in question. Elle Macpherson should have realized being an Australian that the word ‘Aborigine’ denotes a slur.

The remarks made by the supermodel are similar claims of indigenous ancestry made by rapper Iggy Azaelea due to her genetic eye condition.

The screenshots of Elle Macpherson and Iggy Azaelea were featured together by Shari Sebbens, director and actor of Jabirr Jabirr and  Bardi heritage. She asked if they were related.

Macpherson was also criticized by Celeste Liddle, an Arrernte activist who also posted her dark eyes remarking that she was posting it because Elle Macpherson believed it was ‘a thing.’ Macpherson had been in controversy recently for promoting anti-vaccine material on social media.

Macpherson and WellCo, the wellness company owned by her, could not initially be contacted for comments. But the 57-year-old has since clarified that she never meant to upset anyone with her remarks. She told Tahlia Warren-Brand, an indigenous influencer, that her intention was never to be offensive.

But Macpherson has stopped short of apologizing for the offensive post.

Steph Curry Is Proud Of Seth After Warriors Win Over 76ers

Infrastructure Plan: How Hard A Line Should Progressives Take

Fans Supportive As Kim Cattrall Makes A Quiet Exit From Sex And The City...

Finding ‘Ohana: A Blend Of Fantasy And Adventure

What Can Casino Games Learn from the Video Games Market?

There are many lessons that casino game developers can learn from the ever-expanding video games market. Online casino games have become one of the...

Major Back Issues For Ben Simmons Before Game 4

Sean Marks has stated that Ben Simmons had a follow-up MRI after the back soreness returned before Game 4 and it revealed the herniation...

When Joel Embiid subs out of a game, the question of when he’ll return is almost always front of mind. How many minutes of rest...

President Joe Biden believes that if the Supreme Court were to overturn Roe v Wade’s holding of a federal constitutional right to abortion, several...

The collapse of Terra and its stablecoin did affect the cryptocurrency market as a whole on the 11th of May. Most of the projects...