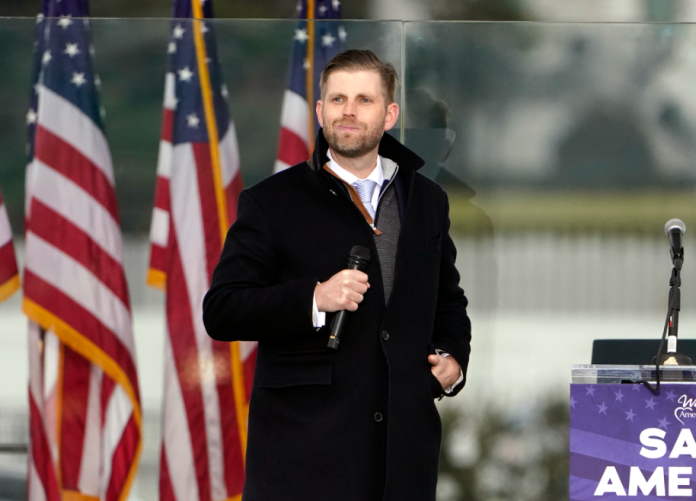 The select committee tasked with looking into the attack on Capitol on January 6 has summoned and received the complete call records of Donald Trump’s son Eric Trump, businessman and activist, and former adviser, Kimberly Guilfoyle.

Sources revealed that the call records obtained were fresh calls that were given by communication companies. They include outgoing and incoming calls, call dates, duration, plus the number of times the calls were made.

This is the first time that subpoenas have been focused directly on Donald Trump’s family. Guilfoyle is also the fiancée of Donald Trump Jr. Guilfoyle and Eric were both engaged in the Stop The Steal campaign initiated by Trump in an effort to scuttle the 2020 election results.

Both were speakers at pro-Trump rallies that finally led to the violence at the Capitol and led to several deaths during and after the attack. It has been revealed that the January 6 Committee was interested in delving into the fund-raising efforts of Eric Trump in support of the Stop The Steal movement.

Eric Trump: There Has Not Been Direct Confirmation From Committee Members

Members of the January 6 Select Committee have declined to speak on the subpoenas. There has been no official indication so far that Guilfoyle or Eric Trump has been directly summoned by the January 6 Committee. There has also been no direct confirmation that records linked to the sons of the former US president were subpoenaed.

There are also indications that people closely linked to Donald Trump who was linked to the Stop The Steal campaign have been subpoenaed. They include members of Donald Trump’s close legal team that included Sidney Powell, Rudy Giuliani, Boris Epshteyn, and Jenna Ellis.

These four were individually subpoenaed and were alleged to have pushed forward wild theories alleging widespread election malpractices. Bennie Thompson, the Chairperson of the Committee, said that they also initiated efforts to upturn the 2020 presidential election results. They were also in direct communication with Donald Trump to stop the electoral votes counting.

The Domestic Agenda Of Biden Is Hanging For A Long Time