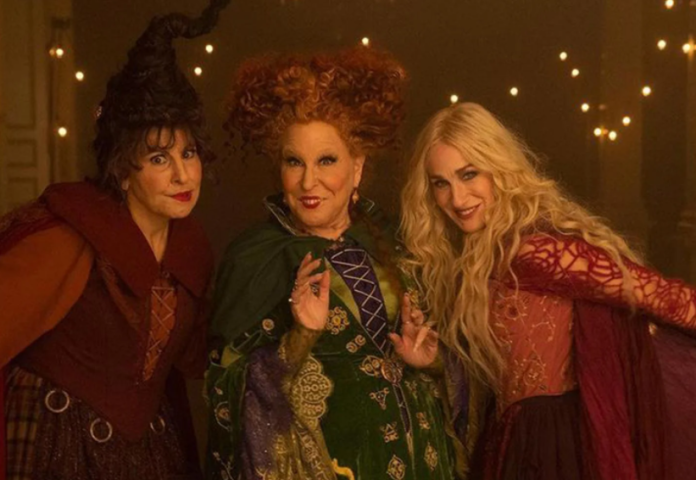 Close to 3 decades after Hocus Pocus was released in 1993, fans return for a repeat of the adored Halloween classic and can’t seem to get enough of the ‘Sistaaaahs’. Disney+ ‘first revealed the comeback of the beloved Sanderson sister for their upcoming release, Hocus Pocus 2 in May this year.

Bette Midler took to Instagram to confirm that they are back, though it has been over 300 years. Hocus Pocus 2 hits the screen next fall on Disney+.

Now Vinessa Shaw has let on where Allison, her character, and Max, her love interest will be, thus suggesting that they might be back in the sequel.

Hocus Pocus Original Cast Back As The 3 Beloved Sanderson Sisters

Sarah Jessica Parker, Bette Midler, and Kathy Najimy will be back in their characters as Sarah, Winnifred, and Mary Anderson in Hocus Pocus 2. The sequel will also be Halloween-themed as the original.

The new logline of the movie reveals that the 3 young women by accident transport the Sanderson witch-sisters to present-day Salem. They must now work out a way to prevent the witches from unleashing fresh havoc on earth.

The original director of Hocus Pocus Adam Shankman won’t be back due to conflicts in schedules. Instead, Anne Fletcher comes on board right at the helm, Disney+ announced.

Shankman made a statement that he is heartbroken that he would not be able to direct his friends, Sarah, Bette, and Kathy, but conflicting schedules prevented him from taking over the reins. He said that Anne would be able to bring as much fun and laughter into people’s lives as proved by her previous works. He remains the executive producer of his ingenious project along with Lynn Harris, the producer.

Thora Birch is expected back with a cameo appearance as Dani.

Hocus Pocus’s crew were seen in Providence, Rhode Island at La Salle Academy this October. The Chase Farm park on the island was transformed into a New England village of the 1670s.