Versatile entrepreneur and digital marketing consultant, Ian Bentley, expresses his love for theater as he takes makes his mark as Broadway Producer

The name Ian Bentley resonates easily with individuals and businesses in the digital marketing space and automotive industry. However, the successful entrepreneur and online marketing expert has expressed his love for theater, a trait that almost no one knew existed beyond his personal circle. Ian’s achievements as an entrepreneur and individual can be easily highlighted in the digital marketing space, as he grew to become one of the biggest and most sought-after brands in the industry, serving automotive businesses and helping dealers nationwide generate tens of millions of dollars in sales.

After graduating from the University of Florida, Ian Bentley honed his skills in graphics design and integrated it into building and developing fantastic websites to help companies improve their online presence and grow their brand. His works became increasingly popular in a relatively short while and he was able to establish himself as the go-to digital marketing solutions provider for players in the automotive industry. Ian Bentley eventually sold his business for 8 figures, a feat that has seemingly rewritten the history books in the automotive industry as well as the digital marketing space.

More than just a digital marketing guru, Ian Bentley is also an entertainment enthusiast that has worked on several projects in the entertainment industry. “I was a theater major and toured in a nationally recognized rock band playing bass, singing backup and producing multiple records,” Ian Bentley said, when he was asked about an interesting fact that most people do not know about him.

“Because of my success in business, I am able to leverage my marketing skills, investment funds and knowledge of music to produce on Broadway (The Encounter & dear Evan Hansen) and develop and orchestrate a musical (Finding Helena),” Ian continued.

Ian Bentley has also taken his entrepreneurial prowess in the entertainment industry, working with big names as well as up and coming acts. “I also was able to bridge a major gap with a San Fran start up (Liquid Seats) by forging relationships with that company and major music acts (Creed and Britany Spears). With those relationships, Liquid Seats quickly transcended from west coast sports oriented secondary market ticket broker to a household name (StubHub)’” said Ian Bentley.

The world of entertainment will definitely be waiting for Ian Bentley and his magic fingers.

What is the DACA program?

Marjorie Taylor Greene Is Not Over Her Nazi Analogies 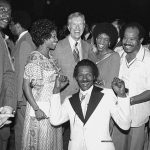