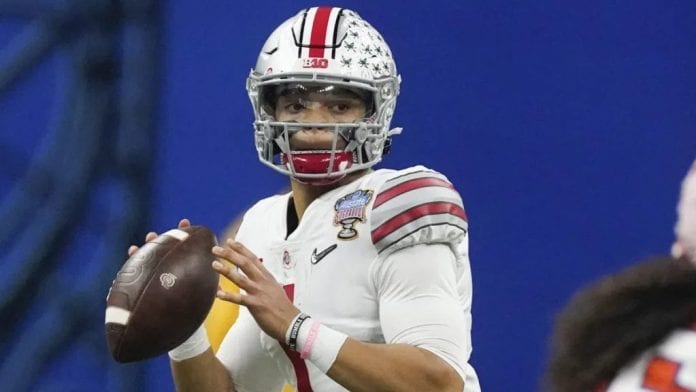 Justin Fields was involved in a spectacular trade move by the Chicago Bears on Thursday. The Bears and the New York Giants traded a total of nine spots for Chicago to sign Fields of Ohio State as the number 11 overall draft pick.

The Gamble For Justin Fields

Moreover, they were very excited to see Justin Fields continue to fall in keeping with the trend of falling of the boards. As such, for them, it was important to execute the plan at the correct place at the correct time. This involved a lot of patience which could have proven to be difficult.

However, he said that his connection with the Giants’ GM went back quite a while. Communication had begun in the morning. Pace considered themselves fortunate to have managed to pull the whole transaction off properly.

Andy Dalton, the veteran free agent, had been signed by the Bears on a one-year deal worth $10M. However, Chicago had their sights set on a long-term quarterback for the team. The last true franchise QB for the organization had Sid Luckman. He had retired in 1950 and has since been a part of the NFL’s Hall of Fame.

Matt Nagy, the coach for the Bears, had apparently reassured Dalton that he would still be starting as the team’s quarterback, albeit temporary.

Justin Fields was optimistic about the move and having to fill the long-standing vacant shoes in Chicago. He said that his swagger, determination, and attitude towards his game sets him up as the perfect candidate for the spot.