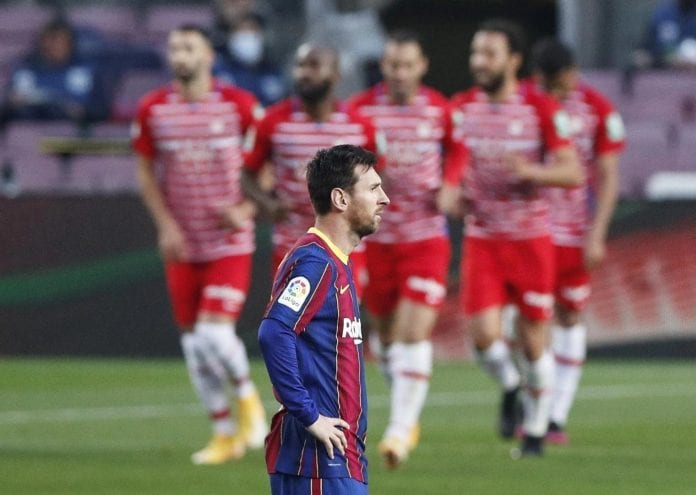 Barcelona was handed a shock defeat at the hands of Granda on Thursday at Camp Nou. As such, the La Liga title holders were prevented from reaching first place in the league. They have not been there since June of 2020.

Lionel Messi had scored Barcelona’s only goal. At the midway point of the first 45 minutes, Messi beat Aaron Escandell, the goalkeeper of Granada, to put the ball into the net. He was assisted by a clever through pass by Antoine Griezmann.

However, he then went on to miss a splendid chance to add to Barcelona’s lead just as the half was coming to a close. This time around, Escandell managed to get enough of his hands on the shot which was helped by the tight angle. The half ended with Messi’s side in the front.

Granada came back and scored the equalizer just as the 60-minute mark was reached. The goal came against the general momentum of the match. Darwin Machis took advantage of a deflection on a through ball. Andre ter Stegen was left with no chance to save the powerful shot at close range.

The night worsened for the home team as Jorge Molina turned in a header to get Granada in front. Granada’s Luis Suarez had crossed in the ball. Messi and his team were left with merely 10 minutes on the clock to salvage something from the match. However, it was not to be.

Jordi Alba, a defender for Barcelona, said in an interview after the match ended that the team had given their all till the final whistle. Unfortunately, they were far too wasteful in the final third. On the other hand, the opposition made the most out of the two chances they got.

The result sees the gap between Barca and leader Atletico Madrid stay at two points. This was also Granada’s first-ever win at Camp Nou in the history of the club.

Meghan McCain Accuses The Media Of Being Sexist

SPCE Has Been Given A Price Target Of $27