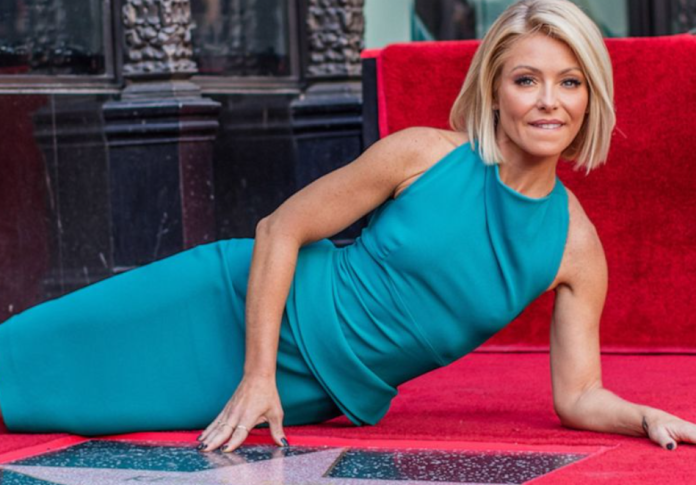 Kelly Ripa made it a memorable birthday for her buddy Jake Shears, posing for his Album on a week that also marked her birthday as she turned 51. Her husband accompanied her on the beach photoshoot. It made for an adorable photoshoot posted on Instagram.

That was an NSFW shoot for sure as the co-host on Live With Kelly And Ryan shared a picture featuring Kelly Ripa, Mark, and the musician. In her Instagram post, Kelly wished Jake a happy birthday and thanked him for allowing them to be included in the cover art of his new album. She added ‘Coming soon to the caption.

The cheeky picture featured the trio posing at the beach at sunset. Kelly Ripa was donning a black suit with images of palm trees. She is facing the sun setting over the ocean while Jake is seen from between Kelly’s legs. Mark Consuelos is seen in the background showing off his physique against the ocean backdrop.

Fans took favorably to the snap. Fans inundated the post with silly sentiments and well wishes. One even jokingly suggested that this was a photo shoot that would not meet with the approval of their daughter, Lola. The user jokingly referred to the picture as wild.

Kelly Ripa posted a typical fun caption writing ‘Cake vs. Cake by the Ocean. Consuelos responded, saying he loved them both and wished her wife a happy birthday. It was a sweet birthday surprise from her husband as he laid out a table filled with goodies just for her.

He then handed Kelly Ripa a large bouquet as her husband wished her a happy birthday.

They then shared a quick kiss as Consuelos revealed a huge two-tier cake for her birthday. The top dessert was red velvet with lemon buttercream at the bottom.

The couple shares three kids and has been married for 25 years.

Fans had their fingers crossed for another birthday celebration this week.

China Responsible For Microsoft Hacking, Says the US And Its Allies!

NYSE KEY Is Expected To Announce A $0.55 EPS