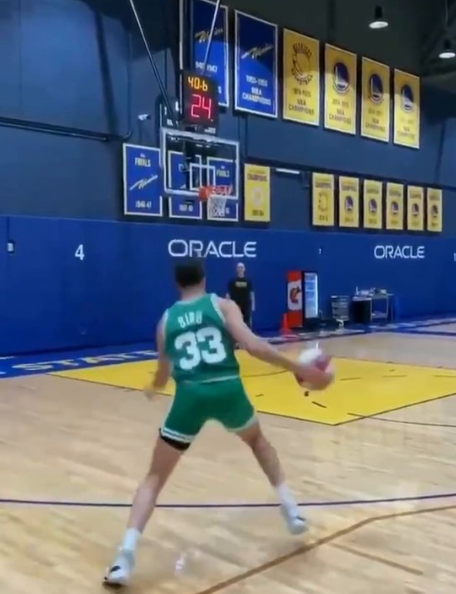 Klay Thompson does a Larry Bird impersonation for Halloween, which was originally aired on NBC Sports Boston.

Klay Thompson is nearing his NBA return after missing the previous two seasons with ACL and Achilles injuries. This means that  Thompson had a little free time to put together a creative Halloween costume and he didn’t disappoint anyone present at the scene.

Klay decked out in a Larry Bird Boston Celtics uniform and did his best Larry legend impersonation at the Warriors’ practice facility on Sunday.

It was not certain as to how many takes it took, but Klay Thompson clearly watched the old tapes to get Bird’s mannerisms down.

It was fitting that Thompson paid tribute to Bird, who twice led the NBA in 3-pointers made in a season and was a prolific outside shooter for his era.

Thompson and Stephen Curry helped usher in the NBA’s 3-point explosion in the mid-2010s, with Klay Thompson making 200-plus deep balls in seven consecutive seasons. Bird’s career-high for 3-pointers in a season was 90.

Can Klay Thompson Find His Old Form Back?

It is not certain if Klay can rediscover his older self, like Bird, after a two-year hiatus, is still to be seen.

The Warriors have been missing his services over the past few seasons. After a traumatic ACL injury in Game 6 of the 2019 NBA Finals against the Toronto Raptors, Thompson has yet to suit up for Golden State as the franchise continues to find some trouble to get back to playoff contention.

This season, with Thompson hopefully returning in full force, Stephen Curry, Draymond Green, and the rest of the hungry Golden State Warriors are aiming to finally make some noise in the West.