Home Entertainment Kylie Jenner On Being The Mother Of Stormy

Kylie Jenner, the star from the reality show, Keeping Up With The Kardashians, made an appearance in the monthly magazine, “tmrw.” It is the edition of the month of May. the 23-year-old entrepreneur gave an insight into her life as a mother. She also talked about her vision for the future when it came to her cosmetics company, Kylie Cosmetics that was launched in the year 2015. She kicked off with lip kits in different shades.

Kylie Jenner talked about her 3-year-old daughter, Stormi. The father of her child is rapper Travis Scott. Jenner claimed her daughter to be her legacy. She said that she wants her daughter to be a kind and a driven person so she is trying her best to raise her that way. She also stated the possibility of Stormi taking over her empire of Kylie Cosmetics someday. Kylie Jenner told the magazine that she can do so if she is willing to.

The style icon then talked about her journey into motherhood. She said that a lot of things have changed on personal levels after she has stepped into motherhood. She claimed that she has grown a lot as a human being and she continues to do so every day. The star also expressed her interest in learning. She added that she was giving her best efforts in order to be the best version of herself.

The deadline for applications to earn a fourth four-hundred dollars stimulus check payment for reduced income New Mexicans is coming up in just two days. The deadline for... 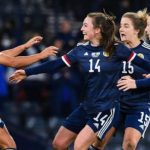 Abigail Harrison Put Scotland Women’s Team On The Verge Of The World Cup As...

The occasion was well worthy of the wait for Scotts and Abigail Harrison. Abigail  Harrison dove to knock in Erin Cuthbert's cross from the corner after...