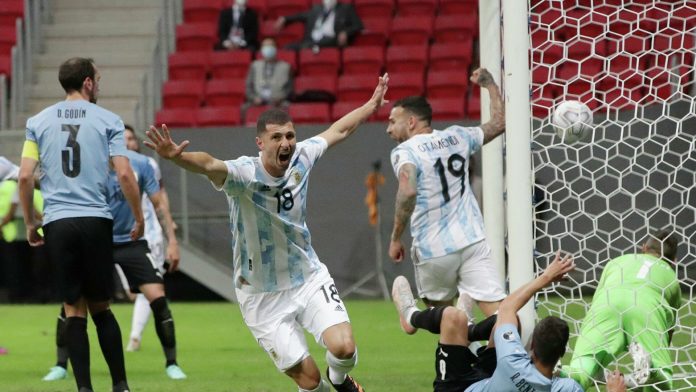 Argentina extended their unbeaten run to 29 games on Tuesday when they beat Colombia 1-0 in a World Cup qualifier.

Lautaro Martinez got the only goal of an untidy game after 29 minutes when he took advantage of slack defending to rifle home from inside the penalty area.

The top four teams in the South American section qualify automatically for Qatar and the fifth-placed side goes into a playoff with a team from the Asian confederation.

Brazil and Argentina have already qualified and Ecuador’s 24 points mean they are almost certain to join them.

The result leaves Colombia in seventh place in the 10-team table with 17 points, five points behind Uruguay, two behind Chile, and three behind Peru, who could strengthen their position further with a win over Ecuador later on Tuesday.

Both runs were extended in a game that Argentina controlled without ever looking like they were in top gear.

“No matter who plays nothing changes,” said winger Angel Di Maria. “We remain the same, with the same mentality.”

“We show sacrifice and humility. Today we knew we’d face a difficult game and we were able to do what we had to do and move forward.”

The home side was without Lionel Messi, who was rested after a recent bout with COVID-19, and influential midfielder Rodrigo De Paul, but Martinez and Di Maria assumed the responsibility and the attacking mantle.

“A lot was said about the players who were missing, that we weren’t at full strength,” goalkeeper Emiliano Martinez said. “But we demonstrated that we are not 11 but a really strong group.”

Di Maria was a threat throughout his long-range shooting and caused problems for Colombia’s second-string keeper Camilo Vargas.

Colombia’s best chance came in first-half stoppage time when Luis Diaz had a shot kicked off the line.

In the night’s earlier games, Chile beat Bolivia 3-2 away and Uruguay ran out 4-1 winners over Venezuela in Montevideo.

Suspension Of Rudy Giuliani From His Law Practice In NY State!