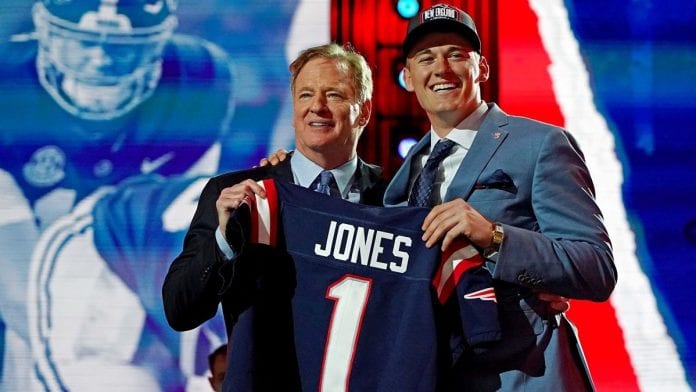 The New England Patriots Chose QB Mac Jones for their 15th overall NFL draft pick on Thursday. The Patriots will be hoping that Jones will be the long-term replacement for Tom Brady as the team’s signal-caller.

The Fortunate Acquisition Of Mac Jones

The Patriots had no certainty over whether Jones would still remain before they got the chance. Mac Jones had been heavily linked with the San Francisco 49ers. However, the 49ers chose Trey Lance from North Dakota State instead. Along with the Chicago Bears trading up for Ohio State’s Justin Fields, it was a very fortunate sequence of events for the Patriots.

Mac Jones had a rollercoaster of a time while having to wait till the 15th pick. In an interview with ESPN, he appeared to have been calm, however. He continued that he feels blessed to have been signed by the great organization. Moreover, he considers it more important to make the most out of the opportunity rather than the order in which it arrives. He later on also admitted that he wanted to play for New England “secretly”. As such, Mac Jones was elated with the selection and hoped to be a correct fit.

The Patriots had one of the worst seasons last year as they missed out on making the playoffs – a first after 2008 while going 7-9. In the quarterback position, the team currently has Cam Newton, Jarrett Stidham, and Jake Dolegala, a player from the practice squad.

Bill Belichick, the head coach, reiterated that Newton is the team’s QB. As far as Mac Jones or Jarrett is concerned, the decision will be taken when they are ready to compete.

Jones stated that both Newton and Stidham are exceptional role models for the youngster. For now, his aim is to follow them and learn their ways of approaching the game.

Bernie Sanders Goes After Manchin And Sinema: Speaks Up On Voting Rights Bill

Cosmos Holdings (COSM) traded 18107299 shares on hands in most recent trading session and observed an average volume with 0.0788K shares....

Tilray Brands, (TLRY) observed an average volume with -0.0286K shares and exchanged 118283 shares on hands in most recent trading session....