Home Top Stories Matt LeFleur All For The Return Of Aaron Rodgers To Green Bay... 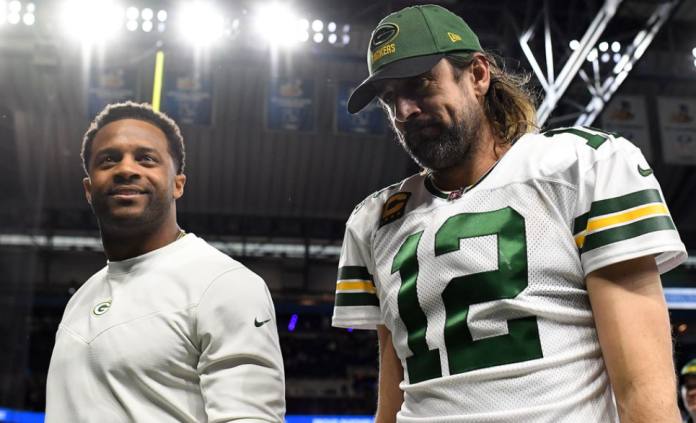 This season has been a big disappointment for the Packers and Aaron Rodgers. Their 13-10 defeat at the hands of the 49ers this Saturday in the National Football Conference playoffs divisional round led to Rodgers considering his future prospects with this team. But Matt LeFleur is firm that Aaron Rodgers should be back with the team. The head coach said that he is all for the return of the potential Hall of Famer.

Matt LeFleur said that they wanted him back badly and the team would be crazy to miss the opportunity. He was sure that Rodgers would be a 2-time most valuable player.

He said that Rodgers give his all for the Green Bays. And his efforts are not just limited to every game or Sunday. He is also a great presence in the locker room. He puts total effort into everything. He said he and everyone on the team was disappointed not to overcome the most difficult part of the season.

Rodgers and Matt LeFleur have been with the Packers for 3 years. The coach and the quarterback combination have between them 39 wins. That is the highest win in league history for a coach.

Matt LeFleur Says Rodgers Has Been A Revelation In Green Bay

Rodgers has also been a revelation with 67.1% completed passes over 12,416 yards. He has 111 touchdowns with just 13 interceptions.

The team has a couple of Conference Championship appearances and a record of 39-9. But they don’t have a Super Bowl appearance and a playoff record of 2-3.

Rodgers spelled out clearly after the game that he wishes to continue with a contender for his next season. According to projections, Green Bay Packers are expected to be around $40M over the off-season’s salary cap.

Rodgers has said that there is a lot to be decided for the next season. He says that he doesn’t wish to be a part of rebuilding the team if he is to continue playing.

VOLATILITY ANALYSIS: Volatility remained at 2.66% over last week and shows 2.79% volatility in last month. Market risk that established with...

Are You Looking For Active Stock? Amazon.com, (AMZN)

bioAffinity Technologies, (BIAF) exchanged 68813360 shares on hands in most recent trading session and observed an average volume with 1172.01K shares....