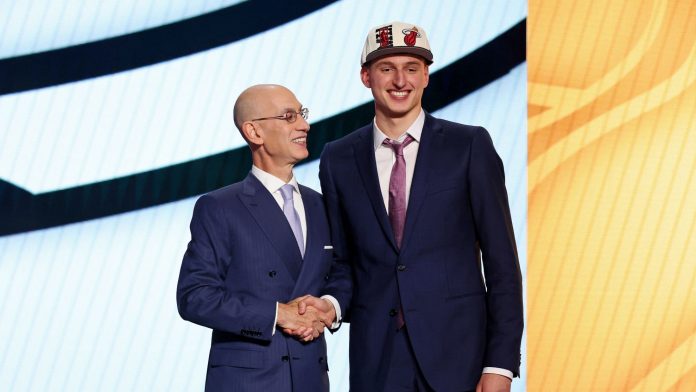 The Miami Heat chose Serbian center Nikola Jovic with the 27th selection in the NBA draught on Thursday.

The 19-year-old, Nikola Jovic, was born in England and, when he was nine, relocated to Serbia. He has participated in the Serbian division for Mega Basket, where this past season he averaged 11.7 points on 43 percent of his shots.

In the spring of this year, Nikola Jovic attended a playoff game in Miami. His name is frequently mistaken for that of Denver’s Nikola Jokic, the Serbian-born, two-time defending NBA MVP. Jovic expressed his desire to one day meet Jokic. It would be absurd, Jovic remarked.

This previous season, Miami was the No. 1 seed in the Eastern Conference and advanced to the conference finals before falling to eventual NBA runner-up Boston in a home Game 7. With the nucleus of Jimmy Butler, Bam Adebayo, and Kyle Lowry all having many years remaining on their contracts, the Heat have the most of its important players under contract for the upcoming season and frequently beyond.

The No. 27 pick has historically proven to be a successful one. This past season, five players—all 27th-round picks—averaged at least 10 points per game: Pascal Siakam of Toronto, Kyle Kuzma of Washington, Rudy Gobert of Utah, Bogdan Bogdanovic of Atlanta, and Robert Williams of Boston. Some players who were selected 27th in the draught have even made it to the Hall of Fame; Dennis Rodman was inducted in 2011.

John Thompson, the player selected with the 27th overall choice in the 1964 NBA Draft, is also a member of the Hall of Fame. Thompson did not make it due to his 3.5 points per game average with the Celtics, but rather for his renowned coaching career at Georgetown.