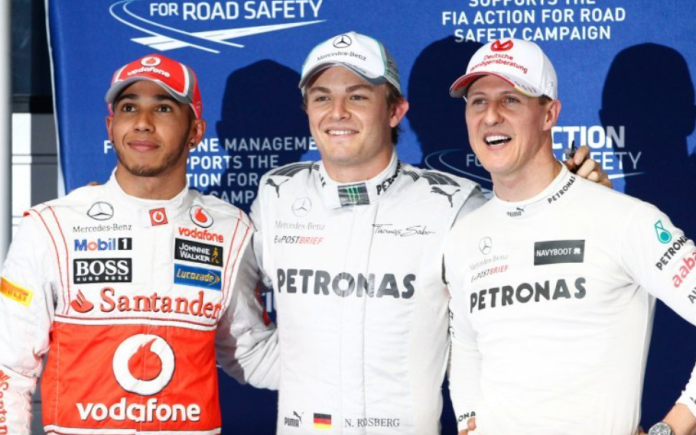 These two icons have etched their names in the history book of Formula One racing and sports in general. Names that are instantly recognized across sports lovers for their incomparable contribution to the sport. Another great, Nico Rosberg, shares his opinion on whom he considers the greatest among the two – Michael Schumacher or Lewis Hamilton.

Nico Rosberg should know as he has seen them both race, raced with them, even though the two greats are a generation apart. Rosberg believes Hamilton edges Schumacher in the race for the Greatest Of All Time debate.

Nico Rosberg hailed the Briton’s ‘amazing natural talent’ as he pulls away from Schumacher’s tally of 7 world titles as he attempts an eighth. Rosberg was a team-mate of both the legends but believes Hamilton has the edge between the two.

Nico Rosberg: Ultimately It Is Down To Hamilton’s Natural Talent Vs Schumacher’s Diligence

It is Hamilton’s unbelievable instincts that set him apart from Schumacher. But Nico Rosberg concedes that Schumacher was more diligent than Hamilton. He says that he was emotionally detached enough to see things from a better perspective.

Nico Rosberg details the difference he feels was in their approach. It was Schumacher’s devotion to detail that set him apart during his reign at the top of Formula One. Schumacher would test drive every day, even when he was at the top of the pile. He knew that there always was something to learn there.

Formula One has been one motorsport that has always seen constant change. Cars, regulations, circuits – everything about it changes every year. so comparing drivers from different parts of history is a tad unfair.

Both drivers had very different careers and made the best out of their respective ears. Both came in under different regulations and times. Both drivers will always be counted among the greatest in their sport and as sportsmen. And we need to look beyond the numbers to realize that.