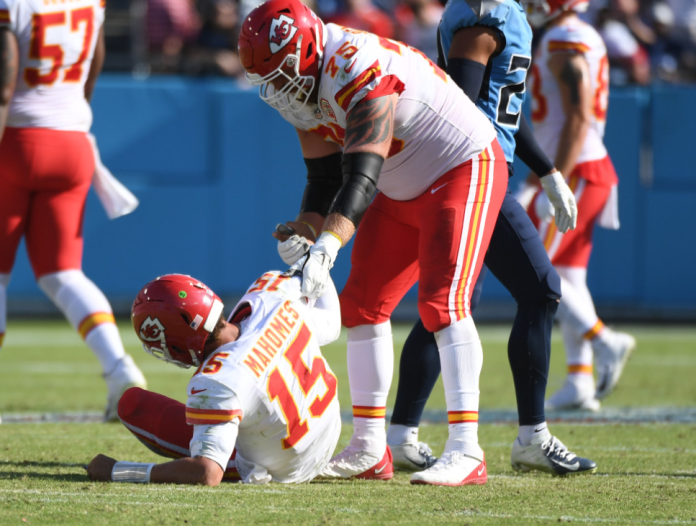 Patrick Mahomes was pulled in the 4th quarter of the game even though he cleared the NFL protocol for concussions. He took a shot to the head and Andy Reid felt that Patrick Mahomes needed a break to cool off.

The Kansas City Chiefs were defeated by the Tennessee Titans by 27-3. Patrick Mahomes expects to come back this week itself and play the next game on Monday night against the NY Giants.

Mahomes will find himself in an unusual place and this is not because of the 3-4 record. The Titans game marked the first time in Mahomes’ career that he went without a touchdown in a regular-season game. Three points are the fewest for the Chiefs since Reid arrived in 2013.

Mahomes threw in an interception and lost a fumble while the Chiefs are fighting through adversity for the first time in Patrick’s professional career.

Patrick Mahomes stated that they had enough leaders on their team and had to find a way. He does not know what it will take but he will surely go in for it. He along with the team will watch the game film and trust that they will find the solution. He added that when people want to build something substantial and great they have to go through tough times.

Patrick Mahomes stated that it was quite early in the year and they can still get whatever they want but it will require them to be better every day. They had the necessary talent in the dressing room to make it happen.

Patrick Mahomes has thrown nine interceptions this season after having just six all of last season. He has committed multiple turnovers in each of the past three games.