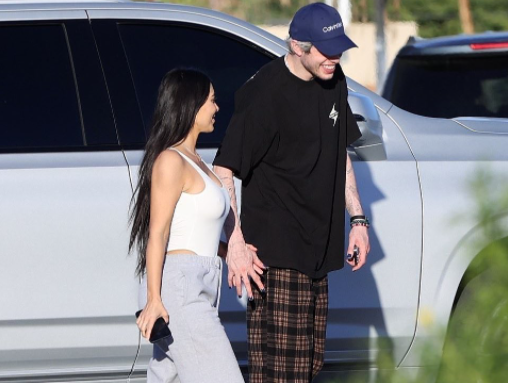 Kim Kardashian and Pete Davidson have sparked rumors of romance as they go out on several dates in Los Angeles and New York. They finally also indulged in a bit of PDA.

Kim and Davidson are shown indulging in PDA in pictures taken in LA. The couple finally set aside any rumors and shared flashy smiles while holding hands at a city parking lot. The couple had dressed down to sport a casual outing.

While Kim was dressed in white sneakers and gray sweatpants, but the sexy quotient was maintained with the white see-through bodysuit. Pete Davidson sported a black loose-fitting T-shirt, a blue cap, paired off with plaid PJ pants taken from Kim’s Skims line.

The trousers were familiar as the star of Saturday Night Live had worn them at his birthday, hosted by Kris Jenner, Kim’s mom, at their mansion in Palm Springs.

The entire gang consisting of Kim, Jenner, Flavor Flav, and Pete Davidson had worn the flannel pajamas to the 28th birthday of the star of King of The Staten Island, this Tuesday.

The first whiff of romance was in the air when Pete Davidson and Kardashian were seen hand-in-hand at an amusement ride at Buena Park in California, late in October.

Pete Davidson had then made arrangements for a dinner inviting Kim to his Staten Island hometown. An insider then had informed that Kim had taken a liking for Pete.

Kim Kardashian liked his company enough to spend two nights running with Pete Davidson at Zero Bond, an A-list club exclusively for private members. Kanye had objected to the PDA between the two before the divorce was finalized.

An insider added that the romance wasn’t flirt like the one between Travis Barker and Kourtney Kardashian.

Kim made known of her to split from Kayne West in January. They share three children. Davidson also broke up recently with Phoebe Dynevor in August.

“I know I’m not a specialist goalscorer” | Thiago delighted after scoring his first...

Madison Bumgarner Gets A Standing Ovation From The Giants Fans

Eminem’s Child Has Called The Rapper Out For Withholding Information